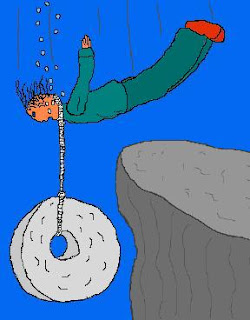 
You probably never thought that you would see this type of warning at the beginning of your pastor’s weekly bulletin column.  Frankly, neither did I.  As I was sitting down to read Sunday’s Philadelphia newspaper, there were some glaring headlines and articles that I wished were not there—I counted four—concerning a grand jury indictment of some priests from Philadelphia.  My stomach had knots in it and it was only breakfast time.
Without going into the details of what was printed, it was all about some priests and a lay teacher allegedly sexually abusing children with further allegations against a priest in charge for not doing enough to protect the children.  Unfortunately, I have seen articles like this before.  I am as sick, embarrassed and appalled as anyone whether or not the allegations are true.
Also in the same section of the paper as three of these stories, was a full page ad for Cialis, an advertisement offering help from a clinic for E. D. (you figure it out!), a front page article about a Grammy nominee’s song originally entitled F. U. (again you can figure this out!), and a story about Supreme Court Justice Clarence Thomas.  (You probably remember that at his confirmation hearing long ago he was accused of alleged sexual improprieties.)  On the TV at the same time was a news story about an incident at the Playboy mansion.
Does anyone else see the sad irony in all of this?  Articles, advertisements, and editorials all somehow related to sex, many times highlighting its perverted abuses.
Here we were on what was Valentine’s Day weekend—another time commercialized to emphasize love, romance and gift giving—with a sickening front page headline about priests and sexual abuse.
Let’s face it.  Every normal, healthy person has a sex drive.  And the Church teaches that as a gift from God, sex is a beautiful expression of love for a married couple.  That’s it.  No sexual act outside of the context of marriage is seen as good or permissible for anyone at any time.  Period.
Priests, nuns and everyone else in this world are nevertheless exposed to the elements of this sexually saturated and sexually charged society with its continual emphasis on recreational sexual activities and its many sick, twisted perversions.  I wager that very, very few people are spared the influence—either direct or indirect—from a culture and world that breathes in lust and perversion daily.  Try hearing confessions for a couple of decades!
Just how big is the pornography industry?  Is not the internet now the newest means of rapidly spreading perversion as well as information?  What about this phenomenon of sexting on phones and computers among teenagers?  Because of a former President’s actions in the White House, did not young people and others worldwide become all too exposed to an oral activity that he said was not sex?  (How about sexual perversion, Mr. President!)  I could go on and on.
I make no excuses for the wrongdoing of priests or anyone else who abuse children.  Let the punishment fit the crime.  But once again I ask for prayers for your priests.  We live in the same world as you do.  And it is not an easy time or place for any of us to live.
Beam me up, Scotty.
Fr. Ed Namiotka
Pastor
Posted by Fr. Edward Namiotka at 11:20 PM