Putting Another Nail in the Coffin 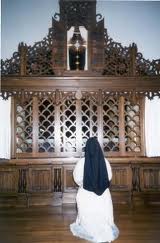 Mother Mary Elizabeth, O.P. entered the Monastery of the Perpetual Rosary, a Dominican cloister in the city of Camden, New Jersey, on September 8, 1941.  Well, strictly speaking, she didn’t enter as Mother Mary Elizabeth but rather as Frances Patricia Coyne.  She was the last of 10 siblings.  The prioress of the Dominican Nuns of the Perpetual Rosary, she spent 70 years in cloistered religious life before the Lord called her back to Himself.

I was introduced to the Dominican nuns well over 25 years ago when I was still a seminarian.  I always found it amusing that Mother Elizabeth, as she was known to me, would remind me that she and the others should be referred to as nuns rather than as sisters.  It was the proper title for cloistered women religious.

I thought about how I would accompany the sophomore class of Sacred Heart High School when they visited the nuns annually.  Years ago I suggested that the students go to the cloister to become aware of the nuns’ unique religious vocation because they obviously could not leave the cloister and visit us.
Mother would arrange for the nuns to converse through a metal partition or grate with the students in small groups so that they were able to ask questions.  Inevitably someone fascinated by the fact that they were cloistered would make a remark.  “You mean you never come out . . . for your entire life?” Mother or one of the other nuns would explain the exceptions (doctor's appointments, the sickness or death of a family member, etc.) while trying to shed light on their vocation.  Their lives were spent taking turns praying the rosary perpetually before the Blessed Sacrament--day and night.  This certainly was not something that the students were familiar with from our secular culture!

Mother had a personality and demeanor characterized by simplicity, innocence and purity.  She radiated a certain joy--in all likelihood the fruit of a life filled with inner peace.  I wonder if praying the rosary faithfully as a cloistered nun for 70 years had anything to do with this?

Today (4/16/11) I concelebrated Mother's funeral Mass.  I saw her body for the last time here on earth.  As I peered into the cloistered part of the chapel, I saw just three nuns sitting closely together in a single pew.  (An additional nun was currently away, visiting a seriously-ill relative.)  Something looked strangely out of place.  The structure was obviously intended for many, many more.  I was told that the monastery in its glory days held 60 nuns!


After Mass, Mother's casket was taken down into the crypt below.  While waiting for the body to arrive I noticed the significant number of nuns buried there already!  How many years and years of rosaries were prayed by these women?

Mother's casket was first placed in a wooden vault.  It would then be sealed in a brick tomb with a stone marker closing up the front.

After the casket was in the wooden vault, the lid was positioned on top and the nails were hammered into the wood to seal the vault.  The priests present were invited to hammer in one of the nails.  I had never seen or done anything like this before.  When my turn came I hit the nail on an angle and it bent.  I straightened it out and then finished.

Goodbye Mother.  If you don't make it to Heaven, I don't think that I have much of a chance.  When you get up there please put in a good word for me, won't you?  Until we meet again . . . .  You are one of my favorite nuns!  (I can just see her smile!)

Afterward, I reflected how this experience gave me an entirely new perspective on the phrase putting another nail into the coffin.  Well, in this case it was technically a vault.  And the nail was a bent one at that. 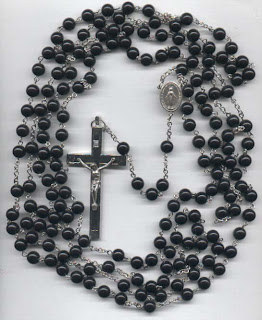