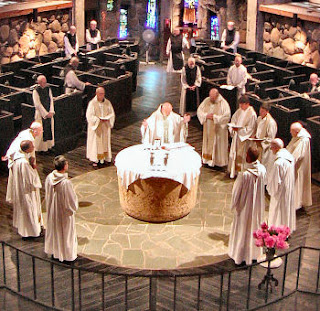 Dear Parishioners,
It has been over 31 years since I started going to a Trappist monastery for a spiritual retreat.  While I do not make my annual retreat at such a location every year, the majority of my retreats have been with the Trappists and at the Abbey of Our Lady of the Genesee in Piffard, NY in particular.
The Trappists or Order of Cistercians of the Strict Observance (O.C.S.O.) are a contemplative order of priests and brothers who follow a strict observance of the Rule of St. Benedict.  They are monks who pray and work (ora et labora) and take vows of monastic stability (they ordinarily do not move around from monastery to monastery), conversion of life (implied with this vow for a monk is a life of poverty and chastity) and obedience.  Technically, they speak briefly when necessary.  Once you get them started, however, most of them are pretty good conversationalists.
The primary “work” of the monks of Genesee is baking bread. They sell their bread in local stores throughout western New York state and the proceeds from the sales supports the monastery.  In the past I have helped out in the bakery during my retreat, mostly getting the loaves ready to ship out on the distributer’s bread trucks.  The monks bake everything from raisin, to 20 grain to wheat to maple cinnamon to sunflower to plain old white bread.  All the bread is good tasting and nutritious!
When I first came to Genesee, the Catholic author and theologian Fr. Henri J. M. Nouwen had just written the Genesee Diary, a book reflecting on the days that he spent in this monastery living as a monk for seven months.  While I am neither an author nor a theologian anywhere near his caliber, I want to share a few reflections and inspirations of my own (over the next few weeks) that I experienced during my retreat at Genesee.  I hope they are insightful and helpful to you.  Perhaps they may be a little entertaining as well.
On my first day here, I wanted to start off the retreat with the Sacrament of Penance and I made an appointment to make my confession during the day.  The scheduled confessor was the former abbot, Fr. John Eudes.  During the course of our conversation he told me that he was 83 years old and had been a monk for 61 years—11 years beyond my existence on this earth!  I did some additional math and realized that he entered the monastery at age 22.  A cloistered, contemplative life for 61 years—beginning at age 22!  (From the looks of the canes and walkers in chapel, he wasn’t near the oldest in the community.)  His mind was sharp and precise, his spiritual advice both challenging and “on target.”  He wasted no words.  He revealed to me aspects of his personal life and spirituality that were edifying.  He was highly educated—especially in psychology/psychiatry and the sciences.  He became an MD prior to entering the monastery.  (Later when he gave us a spiritual conference, I realized that I was in the presence of someone who could truly be called “genius.”  I felt really stupid and humbled as he had probably forgotten more information than I ever knew.)  Now he was spending his days living the solitary life as a hermit within his community.
It is remarkable to me to see the various persons that God has called to follow Him to a religious vocation.  Every one of the monks has a different story to tell, a different personal background.  Yet somehow these particular men are now together as a community of monks praying for us—the Church—each and every day beginning at 2:25 AM.
While most of us are rolling over only partially through our night’s sleep, it’s comforting to know that there are men like these monks keeping vigil for us, praying for us, waiting for the Lord Jesus to return.  May we join our prayer to theirs:  “Come, Lord Jesus.”