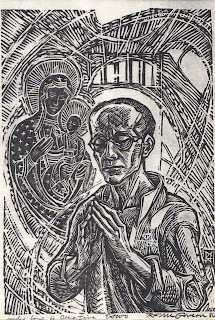 At the time of my ordination I chose St. Maximilian Kolbe as my patron saint.  His feast day is August 14th.  I thought that it might be interesting to tell you something about him.

St. Maximilian Kolbe (January 8, 1894–August 14, 1941) was a Polish Conventual Franciscan friar who volunteered to die in place of a stranger in the Nazi concentration camp of Auschwitz in Poland.

He was canonized by the Catholic Church as Saint Maximilian Kolbe on October 10, 1982 by Pope John Paul II, and declared a martyr of charity.  He is the patron saint of drug addicts, political prisoners, families, journalists, prisoners and the pro-life movement.  Pope John Paul II declared him the “The Patron Saint of Our Difficult Century.”

On February 17, 1941 he was arrested by the German Gestapo and imprisoned in the Pawiak prison, and on May 25 was transferred to Auschwitz as prisoner #16670.

In July 1941 a man from Kolbe’s barracks vanished, prompting Karl Fritzsch, the deputy camp commander, to pick 10 men from the same barracks to be starved to death in Block 13 (notorious for torture), in order to deter further escape attempts. (The man who had disappeared was later found drowned in the camp latrine.) One of the selected men, Franciszek Gajowniczek, cried out, lamenting his family, and Kolbe volunteered to take his place.

During the time in the starvation cell he led the men in songs and prayer. After three weeks of dehydration and starvation, only Kolbe and three others were still alive. Finally he was murdered with an injection of carbolic acid.


Father Kolbe was beatified as a confessor by Pope Paul VI in 1971 and was canonized by Pope John Paul II on October 10, 1982 in the presence of Franciszek Gajowniczek, the man St. Maximilian saved from death.  Upon canonization, the Pope declared St. Maximilian Kolbe not a confessor, but a martyr.

At the time of my ordination, I was extremely fortunate to be given a first class relic (a few strands of his hair) of St. Maximilian taken from him while he was still alive. 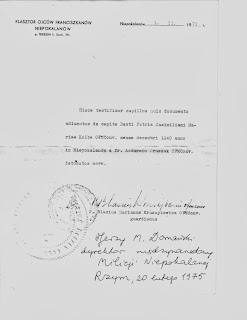 Documentation of the authenticity of the relic of St. Maximilian Kolbe