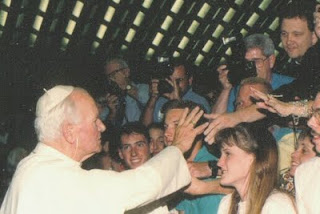 Dear Parishioners,
My family heritage is Polish-American.  My paternal grandfather journeyed here from Suwałki, Poland (northeast corner, near Lithuania) in the early 1900’s.  My parents spoke Polish and as a child I picked up words and phrases but never became anywhere near fluent.  I regret that now more than ever.  I knew things like dzień dobry (good morning), dziękuję (thank you), smacznego (the Polish version of bon appétit) and one other phrase that proved to be the most important of all.
I had been to Poland on two occasions.  When I was there (late 80’s, early 90’s) people would inevitably greet priests with this phrase:  Niech będzie pochwalony Jezus Chrystus! (Praised be Jesus Christ!).  I quickly learned the response: Na wieki wieków. Amen.  (Now and forever.  Amen.)  At the time everybody there seemed to use this phrase with the priests.  The phrase was committed to memory.  (Never know when it would come in handy.)


In July, 1992 I journeyed with a group to Rome and Vatican City.  We had tickets for a general audience with the pope in Paul VI Audience Hall at the Vatican.  People told me to get as close to the aisle as possible because the pope would walk down the aisle and greet the people there.  The best I could do was third person from the aisle.  However, I had two things going for me:  1) I stand 6’6” tall and have a great reach.  2) I knew “the” phrase.
Pope John Paul II (the Great) came down the aisle to thunderous applause.  The audience hall was energized immediately.  As he approached me I stood on top of the seat.  Now I was really, really tall!
In 1979 I had previously missed the opportunity to shake the pope’s hand when he came to St. Charles Borromeo Seminary (Philadelphia) where I was a student.  As I got within a few feet of him there in St. Martin’s Chapel, the secret service got even closer and ran interference.
I was not going to miss him this time!  When the pope was what I thought near enough, I shouted out “the” phrase:  Niech będzie pochwalony Jezus Chrystus!  He heard "the" phrase and came over to me!  He looked me in the eyes.  I could see how unbelievably blue his eyes were—like looking into the sky (or perhaps heaven).
The best I could do with all of the pushing and shoving of the crowd was to extend my left hand as far as I could.  I know what they taught me about which hand to use when shaking hands.  Now I was using the wrong hand to shake with Pope John Paul II (see photo above).
We looked at each other.  He squeezed my hand.  Nothing else was said.  I secretly hoped that he would not say anything back to me in Polish.  Starting a conversation in a language that you are not fluent in can be dangerous.  Could I use Bobby Vinton’s phrase:  moja droga ja cię kocham? (My dear I love you.)  Doesn’t seem right to say to a pope.
Standing on a seat three persons away in a crowd is not really conducive to a detailed conversation anyway.
Fr. Ed Namiotka
Pastor