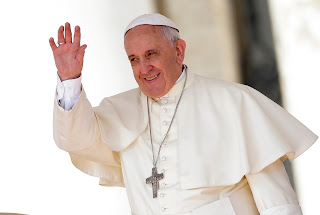 During the course of my life I have had the privilege of personally seeing two popes—St. John Paul II and Benedict XVI.

The year after I entered St. Charles Borromeo Seminary in Philadelphia for college, we were told that Pope John Paul II was coming to Philadelphia (1979) and would visit the seminary.  I was already so proud that the pope was from Poland, the land of my family’s heritage.  Then I heard that we would receive him in our seminary chapel!  Wow! I could not believe it. I was even interviewed by one of the local Philadelphia television stations regarding my thoughts and feelings concerning the papal visit.

Later, I saw Pope John Paul II again in Miami (1987) after I was ordained.  All of the newly ordained were invited to concelebrate an open-air Mass with the Holy Father at Tamiami Park.  I almost concelebrated Mass with him. Unfortunately, a lightning storm suddenly came upon us and the Mass (which was already in progress) quickly became a Liturgy of the Word service as the crowds were immediately dispersed from the field where we were situated.  Oh well!

In 1993 Pope John Paul II travelled to Denver for World Youth Day.  I drove across the country with another priest making a pilgrimage to Cherry Creek State Park for an outdoor Mass.  Finally I had the opportunity to concelebrate an entire Mass with the pope with the magnificent Rocky Mountains in the distance.  In subsequent years, I again concelebrated Mass with Pope John Paul II at Giants Stadium (1995) in the Meadowlands, East Rutherford, NJ.  I remember that there was a tremendous rain during that Mass and I was completely drenched by its end.

(For a detailed description of my meeting Pope John Paul II in Rome, click here.)

When Pope Benedict XVI came to Nationals Park in Washington, DC, I was able to concelebrate Mass there with him.  This time the sun shone brightly and I got to encounter him once again.  I had previously  been in attendance with Cardinal Joseph Ratzinger as he delivered a talk in St. Martin’s Chapel (in the college division) of St. Charles Borromeo Seminary a few years earlier.  Little did I know then that he would eventually become pope.

Now Pope Francis comes to the United States (Washington, New York, Philadelphia) and I, unfortunately, will not be able to see him personally or concelebrate Mass with him.  Sundays involve a number of Masses (5) celebrated here in the parish, besides the time and travel considerations and the security issues required to concelebrate with the pope.  Like many of you, I will be watching the pope on TV and trusting that an optimal view will be provided by the TV cameras.
I reminisced how after I had experienced the energetic and enthusiastic seminarians (and faculty/guests) during the visit of Pope John Paul II to the seminary chapel in 1979, I went back to the now deserted chapel.  There I was with the Blessed Sacrament.  I realized that I was completely alone with the Son of God.  Yes, here He was truly present in the Most Blessed Sacrament, no crowd, no noise, just us.

While it is nice to have the opportunity to see the Vicar of Christ, to me there is nothing better than spending time with Christ Himself.