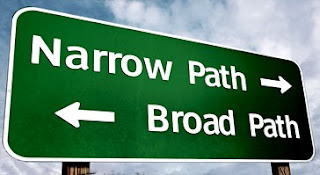 For many years this passage from Sacred Scripture has really troubled me.  What if those who find the road to (eternal) life are actually few?  In this day and age when many (most?) people are canonized at a funeral, when society refuses to be told what to do because of a type of unbridled freedom (actually license), when the moral credibility of the Church has eroded to the point of collapse, and when the most severe sin in our culture has become lack of tolerance, shouldn’t we be a wee bit concerned?

What exactly constitutes the narrow gate?  Bear with me as I do a bit of soul searching.  Traditionally, there have been certain sins that by their nature are considered grave matter—one of the three necessary components of mortal sin. Such sins include (but are not limited to) murder, rape, incest, adultery, perjury, blasphemy, idolatry, sacrilege, fornication, masturbation, euthanasia, abortion, apostasy, homosexual acts, prostitution, et. al.  Realizing also that there is the necessity of sufficient reflection (knowledge) and full consent of the will, people who commit these acts risk being in a state of mortal sin.  In other words, if they die unrepentant of these sins they risk eternal damnation (the fires of hell).

Now let’s take a step further into other more common occurrences of potential mortal sin.  The Church has traditionally declared that it is a mortal sin to intentionally miss Mass on Sundays and Holy Days of Obligation.  What of the approximately 80% of Catholics who no longer practice their faith regularly?  A wide path?

The Catholic Church teaches that the use of artificial birth control is a mortal sin.  Some contraceptives (types of the “pill”) are actually abortifacient in nature, meaning that a fertilized egg (post-conception) is prevented from embedding itself in the mother’s womb.  Hence, a mini or microscopic abortion may have occurred.  Nonetheless, those who use any artificial birth control risk being in mortal sin.  One headline I googled while writing this article stated boldly: Most Catholic Women in U.S. Use Birth Control.  Again, a wide path?

What then do we do with the number of people who use sex recreationally and sleep with each other outside of the context of marriage, or cohabitate outside of marriage, or are in a second marriage “outside” of the Church (divorce and re-marriage without an annulment)?  What about homosexuals who engage in sexual activity, regardless of whether or not they have some “committed” relationship?  What about the rampant use of internet pornography (frequently accompanied with masturbation)?  Sexually active teens?  Sexually active college students?  Friends with benefits?  If all of these people are in grave (mortal) sin, again we seem to have a wide path here.

I conclude this reflection with the scene of the final judgment in St. Matthew’s gospel (Mt. 25:31-46).  Read it when you get a chance.  In essence, the separation of the sheep from the goats involves a condemnation to eternal punishment for failing to do good to/for others.  There is no mention here of any of the grave sins listed above.  Rather there is damnation for what someone fails to do.  Another wide path?

I suggest we all be a little more hesitant before we assume that somehow we all automatically go to heaven. There is a reason that Jesus called for repentance and conversion.  And this message is meant for all of us!

Enter through the narrow gate . . .