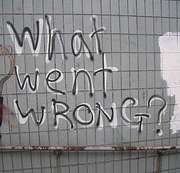 Dear Parishioners,
We have seen in the past decades, especially along the Northeast corridor of our country, significant changes within the Catholic Church. Parishes were merged. Catholic schools were regionalized. Other schools and church buildings were closed or scheduled for closure. Mass attendance has dwindled. With this, the Church’s decision making and teaching authority is questioned and frequently ignored.  Bishops are ridiculed. Pastors are often placed in awkward or difficult positions. Emotions run high. Frustration and anger are frequently expressed. Many look for someone or something to blame. Plenty of questions are asked.
Exactly what went wrong—so terribly wrong—that we are in our current situation?  Are factors like scandals, changing demographics, troubled financial situations or the slumping economy the only causes of our problems?
Jesus asked this question a long time ago:  “. . . When the Son of Man comes, will he find faith on earth?” (Lk. 18:8)  I think this is where we should begin to examine the situation.
In many ways we are experiencing in our society and in our world a profound crisis of faith.

We will certainly find the faithful disciple among us—a person like St. John, the Blessed Mother, or St. Mary Magdalene—someone who stands by Jesus and His Church, faithful until the bitter end.  These three were among those remaining at the foot of the cross.  People like them, however, seem to be few and far between—even in Jesus’ time.  After all, where were all of His other disciples?
More often, Catholics today fall into numerous other categories. Jesus didn’t relate to us the Parable of the Sower (Mk. 4: 3-20; Mt. 13: 1-23; Lk. 8: 4-15) because everyone received His message with undying fervor and enthusiasm. Quite the contrary!
At times, we may be like St. Peter:  “Even though I should have to die with you, I will not deny you.” (Mk. 14:31)—until the going gets tough, that is.


We may be like Sts. Peter, James and John who were asked by Jesus in the Garden of Gethsemane to: “Watch and pray that you may not undergo the test.  The spirit is willing but the flesh is weak.” (Mk. 14: 38) Jesus returned and found them sound asleep. So much for His urgent request!
We may be like the people of Athens when St. Paul tried to preach there: “When they heard about resurrection of the dead, some began to scoff, but others said, ‘We should like to hear you on this some other time.’” (Acts 17: 32)  For many of the so-called academics residing there, the “good news” about Jesus was too much pie in the sky for them and/or Jesus remained simply an intellectual curiosity. Unfortunately, little or no real faith could be found in this situation.
Fast forward to today and the quality of discipleship present:
Some may highlight factors like changing demographics, poor finances, a difficult economy, and various scandals which certainly have some influence on our situation, but I do not think that this goes far enough.  I conclude that many of the problems that we find in today’s Church are  manifestations of multiple factors—a sort of perfect storm—the greatest of which is an obvious decrease in the practice of and adherence to the traditional Catholic (Christian) faith.  And this problem isn’t just local or even regional but throughout the world.
Why, then, do I personally remain faithful to Jesus and His Church?  I recall that Jesus had to deal with a serious crisis of faith when some of His followers chose to leave Him because of what He taught about the Eucharist: “Jesus then said to the Twelve, ‘Do you also want to leave?’  Simon Peter answered him, ‘Master, to whom shall we go? You have the words of eternal life.’” (Jn. 6: 67-68)
Despite everything else that may occur, I pray to maintain my faith in Jesus. I believe that He still works through His Church. And I continue to take consolation in His promise to us that He will remain with us always, until the end of time. (cf. Mt. 28: 20)
Ongoing, personal conversion at all levels of the Church, however, is still very much needed.
Fr. Ed Namiotka
Pastor 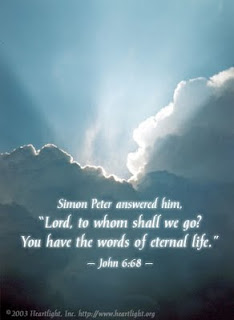