Judgment Day and/or the End of the World! 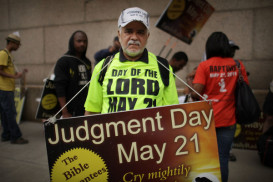 Many years ago as I was walking through Times Square in New York City, a man was standing there holding a sign announcing the end of the world.  He was warning everyone of impending doom.  There was a specific date on his sign on which the end was supposed to occur.  I cannot recall that particular date now, but it really doesn’t matter.  Whatever the date was, it has since come and gone.

Just before the year 2000, I travelled with my mom to Israel.  During a part of our trip we encountered heightened security because of a number of fanatics who thought that the end was coming with Y2K.  The Israeli security troops told us that many crazed people were going to Megiddo—thought by some to be the sight of biblical Armageddon (Rev. 16:16) and were committing suicide there.  Their end came, but the end (of the world) obviously never arrived.

Subsequently, there were those who warned us to prepare for the end times on some other specific dates: May 21, 2011 or December 21, 2012.  I’m always ever-so-suspect when I saw web sites selling t-shirts and survival kits for one or the other of these occasions.

Truth be told, we should always be prepared for our own end.  Jesus warned us over and over again in parables like the Wise and Foolish Virgins (Mt. 25: 1-13).  Jesus concludes His teaching there by saying, “. . . stay awake, for you know neither the day nor the hour.”

Today’s Gospel from St. Luke (Lk. 12: 32-48) is another prime example of being told to be ready for the Master’s return:

Gird your loins and light your lamps and be like servants who await their master’s return from a wedding ready to open immediately when he comes and knocks. Blessed are those servants whom the master finds vigilant on his arrival. (Lk. 12: 35-36)

From these and many other passages like them from Sacred Scripture, I know I have to be prepared and ready. Conversion, repentance for sin and vigilance are a major part of the Christian message, as are love, forgiveness, hope, Resurrection and eternal life.

What do we do to prepare for our own end?  We need to live out the Gospel message in our daily lives.  We need to cling to Jesus, pray and be faithful.  And if we are doing this, then we can follow the advice of Saint John Paul II which he proclaimed repeatedly during his pontificate:  Be not afraid!

A story is told about St. Francis of Assisi who was out hoeing his garden.  When someone asked him what he would do if he were suddenly to learn that he would die before sunset that very day, he simply replied, "I would finish hoeing my garden."

Pastor
Posted by Fr. Edward Namiotka at 8:17 AM