Who Do You Trust?

With the current 24-hour news cycles, it appears that the media sometimes has to create irrelevant news stories, or report on matters really insignificant.  Who won Dancing with the Stars?  Frankly, with the world in the situation it is in—who cares?  Sometimes there is an apparent bias in the reporters’ views.  Just switch channels from Fox to CNN to MSNBC and you should notice the obvious difference in reporting.  Objectivity too often seems lost.  My biggest frustration is when the facts are distorted or purposely omitted.  Don’t we deserve the truth?

From a personal example and perspective, I have witnessed coverage of the March for Life in Washington, DC seriously underreported in past years, probably because it did not fit a particular political agenda or narrative.  Additionally, a very small group of protesters present at the March is magnified to escalate controversy to a scale much larger than it really was.  Controversy apparently sells more than calm.

Sometimes stories in the press contain inaccuracies, quotes are taken out of context, facts are omitted and people are left with a barrage of sound-bites.  Is this good journalism?

Now if I continue this line of thought into politics, I find it difficult to trust too many of the candidates—especially with the US presidential election just around the corner.  Obvious adversaries somehow become ardent supporters of one another.  Are we supposed to believe in some miraculous reconciliation without some consideration of possible future political appointments or favors?  One candidate’s advertisements state how supportive of children she is, while at the same time unapologetically supporting abortion on demand.  Aren’t babies in the womb pre-born children?  Something just doesn’t jive here.  Another candidate boasts about his business experience and making millions, while I personally heard from a local contractor how he wasn’t fully paid by the candidate for services rendered.  Something stinks here too.  Who do I believe?  Then there are issues involving the private e-mail server, unreleased tax returns and IRS audits, Congressional hearings, FBI investigations, possible past/present racial discrimination, Benghazi.  .  .  .

I am sick of it all!  Please find me a remote island somewhere.

Our currency (at least until now) says IN GOD WE TRUST.  We claim to be one nation under God.  I find that my only true trust is in God as manifest to us through Our Lord Jesus Christ.  When He says “I am the way and the truth and the life” (Jn. 14:6) I know that He alone can say this with absolute certitude and authority.

My only future consolation is that no matter who may be elected president, Jesus Christ is still King of my life. 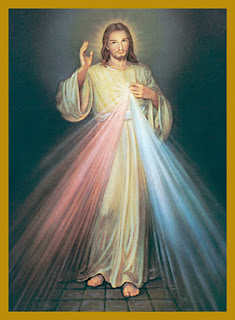 Jesus I Trust in You
Posted by Fr. Edward Namiotka at 3:06 PM