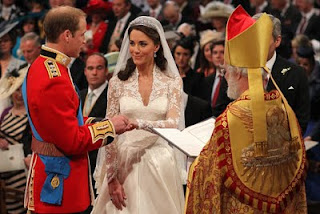 Dear Parishioners,
I watched the royal wedding.
I admit it.  (Please don’t tell my friends.)
It was just on so many networks.
One of the commentators on the TV channel that I was watching made the following statement about the fact that Prince William and Kate Middleton lived together before marriage:
“We used to call it living in sin, but now we call it getting to know each other.”
Would anyone want to guess my reaction to this statement?
Pastorally, this is a situation that we priests have to deal with all too often in our culture.  When I was first ordained, couples who came in for marriage prep who were living together may have attempted to hide the fact that they were living together by giving his or her parents’ address for one party.  This is usually not  the case anymore.   Most of the time, they just tell me outright.  While I might admire their honesty, I can’t say that their decision to live together prior to marriage was the moral one.


I certainly risk offending people, being seen as old-fashioned or out-of-it and open myself up to criticism and rejection.  The reasons given to me for cohabitating range from economic reasons to ignorance (at some level) to outright disregard of Church teachings to mere convenience to whatever.

However, let’s see what the Bible (the inspired Word of God for Christians of all denominations) says on this topic:
Be sure of this, that no fornicator or impure man, or one who is covetous (that is, an idolater), has any inheritance in the kingdom of Christ and of God.  (Eph. 5: 5, RSV)
This is the will of God, your holiness: that you refrain from immorality, that each of you know how to acquire a wife for himself in holiness and honor, not in lustful passion as do the Gentiles who do not know God . . . For God did not call us to impurity but to holiness.  Therefore, whoever disregards this, disregards not a human being but God, who (also) gives his holy Spirit to you. (1 Thes. 4: 3-5, 7-8)

The U.S. Bishops’ Pastoral Letter on Marriage states the following:


Social science research, however, finds that cohabitation has no positive effects on a marriage.  In some cases, cohabitation can in fact harm a couple’s chances for a stable marriage.  More importantly, though, cohabitation involves the serious sin of fornication.  It does not conform to God‘s plan for marriage and is always wrong and objectively sinful.

The commitment of marriage for two baptized Christians is considered by the Catholic Church to be a sacrament.  It is an oath before God and the Church by which the husband and wife publicly pledge their love and lifelong fidelity to each other.  They affirm and seal this oath by their conjugal union.

Sex before marriage—almost always implicit in living together—is living a lie.  The bodies say to each other that I am completely and totally yours—the “two shall become one flesh” experience Jesus spoke about (Mk. 10: 8)—without the lifelong commitment being formally (sacramentally) made.

I suspect that we will be dealing with this issue on a regular basis for the foreseeable future.  The Church has received a diminished respect as a teaching authority in the eyes of too many people—even members of Her own flock.  The liberal communications media is far too often anti-Church, anti-morality, and elitist.  It is certainly an uphill battle for those seeking to be faithful to the teachings of Jesus Christ and His Church.

At times like these I think of the words from the Letter to the Hebrews:

Jesus Christ is the same yesterday, today, and forever (Heb. 13:8)

His teaching and the teaching of His Church will endure and His words are those which give eternal life.

Oh, by the way, congratulations and good luck to Prince William and Her Royal Highness, Catherine!

(I just wish you had set a better moral example for your future subjects.)