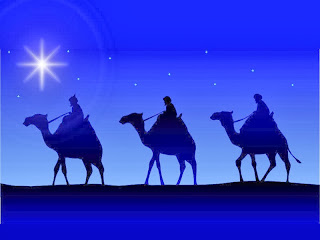 We three kings of Orient are,
Bearing gifts we traverse afar.

As far as I can remember, this popular carol, referring to the three kings from the East, has been sung annually during the Christmas season.  The carol itself was written in the 19th century by the Rev. John Henry Hopkins, Jr., an Episcopalian clergyman.  Popular folklore has grown over the years regarding them, although the Sacred Scriptures dedicates only twelve verses to them in St. Matthew’s Gospel (Mt. 2: 1-12).

First of all they are called magi in the bible—not kings.  Speculation has it that they were astrologers, although the term itself sometimes refers to a magician or a Zoroastrian priest.  In any case, they were observing a star in their pursuit of the newborn King of the Jews.  There is no mention that there are actually three of them, but the number of gifts seems to lead people to draw that conclusion.

With time the magi have been given names—Caspar (Kaspar), Melchior and Balthazar—although there is no biblical basis for this either.  We are told that they brought three special gifts to the Christ Child—each seemingly with a unique significance:  gold, frankincense and myrrh.  While there are varied interpretations of the meaning of these gifts,  gold is usually seen as a royal tribute paid to a king, frankincense as a sign of divinity and myrrh as an embalming oil as a symbol of death or, perhaps, healing.

What is the spiritual significance of this event known as the Epiphany?  According to the Catechism of the Catholic Church:
In the magi, representatives of the neighboring pagan religions, the Gospel sees the first-fruits of the nations, who welcome the good news of salvation through the Incarnation.  The magi’s coming to Jerusalem in order to pay homage to the king of the Jews shows that they seek in Israel, in the messianic light of the star of David, the one who will be king of the nations.  Their coming means that pagans can discover Jesus and worship him as Son of God and Savior of the world only by turning toward the Jews and receiving from them the messianic promise as contained in the Old Testament.  (Catechism of the Catholic Church, # 528) 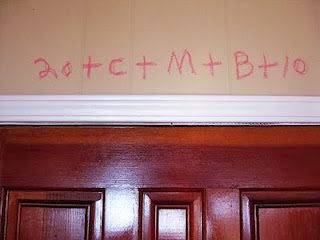 Marking above the door in the year 2010

In Spain, the Philippines and various other countries throughout the Spanish-speaking world, various traditions have sprung up surrounding the Three Kings with forms of gift-giving attached.  In a European tradition, the initials of the king’s names are marked in chalk above the doors of homes (for example,  C+M+B or K+M+B) as a blessing for the New Year.  Other cultures celebrate the kings with a special ring cake concealing a figure of the baby Jesus inside.

No matter what traditions surround the celebration of the Epiphany, we need to always remember that Jesus Christ is King!

O come let us adore Him!

Posted by Fr. Edward Namiotka at 7:28 AM