Miracle of the Sun 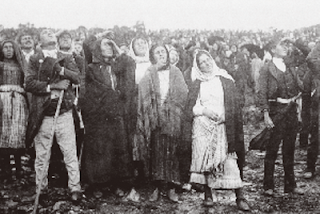 Dear Parishioners,
October 13th marks the  anniversary of the miracle of Fatima, Portugal.
As you may recall, Our Lady was reported to have appeared to three shepherd children, Jacinta, Francisco and Lucia, once every month beginning on May 13, 1917 and ending on October 13, 1917.
On 13 May 1917, ten year old Lucia dos Santos and her younger cousins, siblings Jacinta and Francisco Marto, were tending sheep at a location known as the Cova da Iria near their home village of Fatima in Portugal.  Lucia described seeing a woman "brighter than the sun, shedding rays of light clearer and stronger than a crystal ball filled with the most sparkling water and pierced by the burning rays of the sun."  Our Lady subsequently exhorted the children to do penance and to make sacrifices to save sinners.  She also requested that the Holy Rosary be prayed daily--for world and personal peace--and that the Brown Scapular be worn.  She asked that we pray for the conversion of Russia.  (It should be noted that the beginnings of Communism were starting to appear in Russia at the time.)
It was claimed that the Virgin Mary had promised a miracle for the last of her apparitions on October 13th, so that all would believe.  What transpired became known as "Miracle of the Sun."  A crowd believed to be approximately 70,000 in number, including newspaper reporters and photographers, gathered at the Cova da Iria.  The incessant rain had finally ceased and a thin layer of clouds cloaked the silver disc of the sun such that it could be looked upon without hurting the eyes.  Lucia called out to the crowd to look at the sun.  Sometime while Lucia was pointing towards the sun and claiming to have visions of various religious figures in the sky, it is believed that the sun appeared to change colors and to rotate like a fire wheel.  Then it seemed as though the sun would crash down to earth.   For some the sun appeared to fall from the sky before retreating, for others it seemed to “dance.”
An atheistic reporter commented on the event at the time:  "One could see the immense multitude turn towards the sun, which appeared free from clouds and at its zenith.  It looked like a plaque of dull silver and it was possible to look at it without the least discomfort.  One might have thought an eclipse was taking place.  But at that moment a great shout went up and one could hear the spectators nearest at hand shouting: ‘A miracle! A miracle!’  Before the astonished eyes of the crowd, whose aspect was Biblical as they stood bareheaded, eagerly searching the sky, the sun trembled, made sudden incredible movements outside all cosmic laws - yes, the sun 'danced'!"

Many of the onlookers were terrified that the sun would crash down upon them.  Then, as the sun returned to normal, each person in the crowd realized that they were completely dry despite being soaked from the rain just minutes before.

While the “Miracle of the Sun” was seen and experienced by so many, the miracle more importantly is certainly meant to draw attention to the message:  prayer (especially the Holy Rosary), penance and conversion.

Perhaps you may want to read one of the many books about Fatima or watch the movie The Miracle of Our Lady of Fatima (1952) to become more familiar with the story.