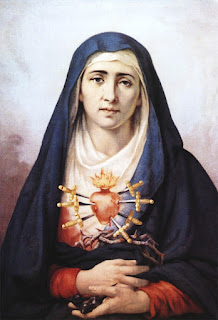 For some time now I have been prayerfully considering again offering a public morning Mass on the first Saturday of the month. When I was sick and hospitalized more than a year ago, public Saturday morning Masses at our parish ceased allowing me some time to recuperate. With thanksgiving that I am now healthy and more determined than ever to accomplish whatever God desires, I sense some urgency and a necessity to encourage this perhaps unknown, forgotten or ignored devotion. Below is a brief history of the origin of the first Saturday devotion:

In the third of Her six apparitions at Fatima, Portugal in 1917, Our Lady promised to return to make a special request for the Communion of Reparation on the First Saturdays. Eight years later, on December 10th, 1925, the eldest and only surviving visionary, Lucia dos Santos, was an eighteen-year-old postulant in a Dorothean convent in Pontevedra, Spain. Having returned to her cell that evening after supper, she suddenly saw Our Lady standing close by her, in the presence also of the Child Jesus, Who was standing on a little cloud.

At first Our Lady did not say anything. It was as if She could not speak, being overwhelmed with sorrow. She held Her Immaculate Heart in Her hand for Lucia to see, pierced all around by terrible thorns, and She placed Her other hand on Lucia’s shoulder, as if to communicate a most familiar and loving appeal. It seems almost as if, in anguish, She sought to lean for support on Lucy’s shoulder.

The Child Jesus spoke first, imploring: “Have compassion on the Heart of your Most Holy Mother, covered with thorns, with which ungrateful men pierce It at every moment, and there is no one to make an act of reparation to remove them.”

Then Our Lady added: “Look, My daughter, at My Heart, surrounded with thorns with which ungrateful men pierce Me at every moment by their blasphemies and ingratitude. Do you, at least, try to console Me, and announce in My name that I promise to assist at the moment of death, with all the graces necessary for salvation, all those who, on the first Saturday of five consecutive months shall [1.] confess, [2.] receive Holy Communion, [3.] recite five decades of the Rosary, and [4.] keep Me company for fifteen minutes while meditating on the fifteen mysteries of the Rosary, with the intention of making reparation to Me.”             (The Fatima Center)

Beginning this month, first Saturday Mass will be offered each subsequent month at 9 AM followed by a recitation of 5 decades of the Holy Rosary. The Sacrament of Penance (Confession), requested as part of the devotion, can be satisfied within 8 days (before or after). I encourage everyone to consider making the five consecutive first Saturday devotion sometime during 2023.
I had mentioned in a previous homily (January 1, 2023), the five first Saturdays correspond to the five kinds of offenses and blasphemies committed against the Immaculate Heart of Mary. They are:

I believe it is of utmost importance that we all take seriously the urgent pleading of Our Lady over the centuries, and especially at Fatima, that has called us to repentance and to turn back to Her Divine Son.
Remember the words of of Our Lady: “I promise to assist at the moment of death, with all the graces necessary for salvation . . .” all those who fulfill the requirements of this devotion.

Posted by Fr. Edward Namiotka at 7:51 AM