Listening to a Ukrainian Archbishop 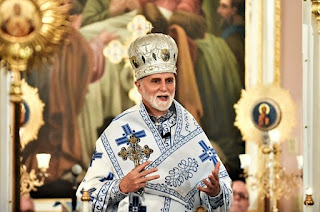 s I write today, I am attending our annual Presbyteral Convocation, which is fancy terminology for a meeting or gathering of priests.  We are in Avalon for three days enjoying some priestly fraternity, listening to and reflecting on a few talks, sharing some meals and discussions, praying together and honoring our priest jubilarians at Mass and being encouraged to minister with more dedication and love for all of you.

This year’s guest speaker is the Most Rev. Borys Gudziak, Archbishop-Metropolitan for Ukrainian Catholic Archeparchy of Philadelphia.  Some information from his official biography:

Archbishop Borys Gudziak was born in 1960 in Syracuse, New York, the son of immigrants from Ukraine. He earned a bachelor’s degree in philosophy and biology from Syracuse University in 1980 and then studied in Rome, in the circle of Patriarch Josyf Slipyj. He received a STB degree in theology from the Pontifical Urban University in 1983 and then returned to America to pursue a doctorate in Slavic and Byzantine Cultural History at Harvard University, which he successfully defended in 1992. In 1995 he earned a licentiate in Eastern Christian studies from the Pontifical Oriental Institute.
In 1992, Borys Gudziak moved to Lviv where he founded and directed (1992-2002) the Institute of Church History. In 1993, he was appointed Chairman of the Commission for the Renewal of the Lviv Theological Academy. From 1995 until 2000, he served as Vice Rector of the Lviv Theological Academy, then as Rector from 2000 to 2002. In that year, Gudziak became Rector of the Ukrainian Catholic University (founded on the basis of the Academy), and in 2013 its President.
Ordained as a priest on November 26, 1998, Gudziak was appointed Bishop of the Ukrainian Greek Catholic Church in France, Belgium, the Netherlands, Luxemburg and Switzerland in 2012. The official enthronement ceremony as Metropolitan Archbishop of Philadelphia of the Ukrainian Greek Catholic Church took place on June 4, 2019 in the Ukrainian Catholic Cathedral of the Immaculate Conception in Philadelphia. Archbishop Gudziak became the seventh Metropolitan Archbishop of the Archeparchy of Philadelphia of the Ukrainian Greek Catholic Church.
Archbishop Gudziak has appeared regularly on leading global TV channels and media providing expert commentary. He has received numerous international awards and distinctions. Having written many articles and books, he travels globally giving lectures and talks on theology, history, spirituality, education, society, and current challenges in Ukraine. He speaks English, Ukrainian, Italian, Polish, French, Russian, and German. He is an honorary citizen of Lviv, Ukraine.

The Archbishop gave the priests two talks based on the words of the Mass describing Jesus' consecration of the Holy Eucharist, and then presented his unique perspective on the war in Ukraine during a third talk.  I am currently digesting his words and insights for use at a later time.

This evening, during the Mass (the feast of St. Luke the Evangelist), we will honor our priest jubilarians celebrating 25, 40, 50 and 60 years of ordained priesthood.  I watch as our diocesan priests grow older with the number fewer.  I see how many foreign-born clergy, fortunately, now supply what the decreasing number of our own native-born clergy are unable to do.

What will the future hold for the Diocese of Camden? Only the Lord knows for certain.  However, today we celebrate the ministry of those who have answered the call to priesthood and have remained faithful to it.  Ad multos annos!