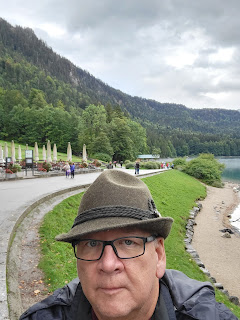 Guten morgen!  Or, as they say in Bavaria: Grüß Gott (a form of “God bless you”).

Maybe some of you will recall the movie from 1969 about a bunch of American tourists in Europe entitled “If It’s Tuesday, This Must Be Belgium.”  I’m going to have to watch it again.  I understand there is a sequel. I don’t need to watch the second film. We just experienced it on our own.

Last night I slept in my own bed at the rectory. I was exhausted after being up from about 5 AM (Central European time) in Munich.  The flight home from Germany to Philadelphia was rather uneventful and it arrived on time. Getting through customs was another story. I don’t want to throw anybody under the bus, but, as a friendly reminder, don’t try to bring the uneaten fresh fruit (apples, pears) that you were served for breakfast back into the country. It can cause certain “problems” with U.S. Customs and Border Protection.

Continuing with my report of the pilgrimage (saga) from last week, we spent only a few hours in Bratislava (Slovakia) and then two days in Vienna (Austria).  Vienna's highlights included seeing its cathedral (St. Stephan) and attending an orchestra concert.  Later, we visited Altötting (Bavaria) where there is the famous statue (Black Madonna) of Our Lady of Altötting and a Capuchin Franciscan friary housing the relics of St. Conrad of Parzham, O.F.M. Cap.  Both of these are worth investigating.  Pope Benedict XVI has great devotion to Our Lady of Altötting and even gifted his episcopal ring to her from his time as Archbishop of Munich.  The ring was then placed on the statue itself.  St. Conrad of Parzham had a story similar to St André Bessette in our part of the world (Montreal). Both were humble porters (doorkeepers) who became saints.

Our pilgrims later attended the famous Passion Play in Oberammergau (Bavaria).  The play which is performed in a covered, open-air theater takes around six hours to complete.  All of the many participants are from the village.  There is a magnificent, large choir and an orchestra.  Naturally, the dialogue and songs are completely in German, but we were given a book with the complete translation into English.  Because of its great length, we were allotted time at the intermission to have a meal in a local restaurant.

The Passion Play is an event I had heard about in my youth but never realized I would eventually experience for myself. The play was not a performance but a faith-filled event to be experienced. The current interpretation showed how the Old Testament (Hebrew Scriptures) were fulfilled in the life of Jesus.  There was some obvious artistic creativity and poetic license employed during the performance. I was disappointed, however, by the portrayal of the Last Supper as it omitted the most important words of consecration spoken by Jesus (“This is My Body. . . This is My Blood”). Perhaps, it may be just another indication of how many people do not truly grasp the Real Presence of Jesus in the Most Holy Eucharist.

Finally, it was on to the city of Munich with its famous Glockenspiel (clock) and many biergartens.  Fortunately, we just avoided the crowds of the Oktoberfest.

While we didn’t lose anyone permanently during the trip, there were a few moments of separation-anxiety.  Some items (backpacks, passports) were lost but then found.  The tour bus, unfortunately, took off with my cell phone.  I don’t know what it wanted with my phone.  Thanks to modern technology, I was able to track the phone on my computer and it was returned the next day.  (You didn’t actually think that I was going to blame myself for this mishap, did you?)

I am certainly glad to be home! 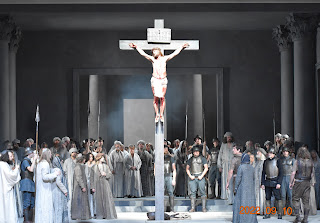 The Passion Play at Oberammergau, Germany 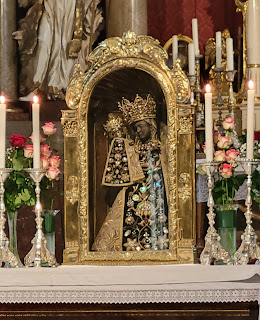 Our Lady of Altötting 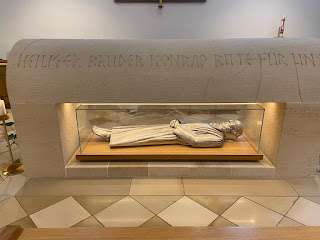 Tomb of St. Conrad of Parzham 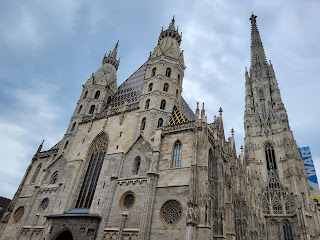 Posted by Fr. Edward Namiotka at 8:34 AM

Email ThisBlogThis!Share to TwitterShare to FacebookShare to Pinterest
Labels: Namiotka, Oberammergau, Our Lady of Altötting, pilgrimage, St. Conrad of Parzham