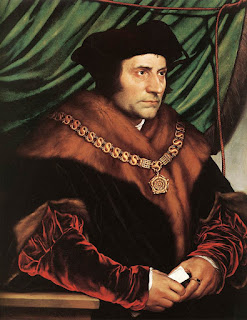 On Tuesday, we concluded our 40 Hours Devotion on the feast day of the patron of our parish, St. Thomas More.  I am personally grateful to the many parishioners who participated.  It is edifying to me to come into the church and see people praying at all times of the day and night.  My special thanks to those who kept vigil during the late, late night hours.  May our Eucharistic Devotion be pleasing to the Lord and bring many blessings to our parish family!

I first was made aware of St. Thomas More by watching the 1966 film, A Man for All Seasons.  At that time it won Academy Awards for Best Picture, Best Director and Best Actor.  Today in our PC culture, I wonder if it would be recognized at all?  I highly recommend its viewing.

Thomas More (1478-1535), a lawyer and scholar, was most notably Lord High Chancellor to King Henry VIII.  He staunchly defended his Catholic faith and was unwilling to recognize the king’s divorce and re-marriage and the king’s self-declared leadership over the Church of England.  For this he was convicted of treason and was subsequently beheaded (July 6, 1535).

Many years ago, during a trip to London, I was able to tour the Tower of London where both St. Thomas More and St. John Fisher were held before their executions.  Little did I know that I would someday be pastor of a parish named for this saintly lawyer.  (Saintly lawyer.  Is that an oxymoron?  Sorry to any honest, dedicated barristers who may read my letter.  However, we do know at least this one made it to heaven.  But I digress . . . .)

St. Thomas More risked everything he had—family, fortune, reputation, etc.,—to stand firm under pressure from the king.  In the end he is reported to have said:  “I die the King’s good servant, and God’s first.”

St. Thomas More shares a feast day (June 22) with St. John Fisher, who was a bishop (cardinal), theologian and Chancellor of Cambridge University.  Like More, Fisher refused to acknowledge King Henry’s divorce and re-marriage and his self-declared supremacy over the Church.  St. John Fisher was beheaded on Tower Hill on June 22.  He heroically went contrary to all of the other English Catholic bishops of the time and remained faithful to Rome.  My question to all is:  Who in the end was the saint?

Martyrdom is certainly the bravest act that one can demonstrate in defense of one’s Catholic faith.  Living in an age of indifference, apathy and sometimes even hatred for the Catholic Church, our faith can be trivialized, disregarded, and held in contempt.  It can be a continual uphill battle to remain faithful.  Why bother?

I pray that it is the latter. 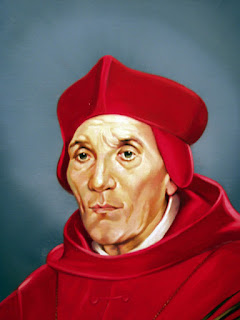