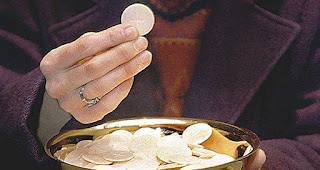 Before Christmas I began writing about various aspects of the current Novus Ordo Mass.  Now that we are back in ordinary time, I continue looking at something that is very commonplace in today’s parishes:  Extraordinary Ministers of Holy Communion (EMOHC).

While they have become known as “Eucharistic Ministers” in many, if not most, parishes, realize that their proper title includes the word extraordinary.  In fact, it seems almost ridiculous to use this term since they are absolutely commonplace no matter where you go to Mass, except for some notable exceptions (e.g., traditional Latin Mass parishes, etc.).  How and why did this happen?

I remember when EMOHC’s were first introduced into the parishes years ago, it was stated that any one person could only serve in this capacity for a set term (perhaps 2 or 3 years) so that no one got the impression that this position was an ordinary ministry in the Church.  The ordinary ministers of Holy Communion are the priests and deacons.  Gradually, people were never replaced and more and more people were urged to step forward to participate in this “ministry.”  They were no longer considered extraordinary but rather became supplemental.  The lines for Holy Communion would now move quicker and the Most Precious Blood could be offered to people on a regular basis.
It was also seen as a “positive” benefit that the EMOHC could help take Holy Communion to the homebound and to the hospital.  More people could be reached regularly while the priest would be available for the Sacrament of Anointing of the Sick and the Sacrament of Penance and Reconciliation, when needed.

Was there any downside to this overuse of extraordinary ministers?  We now increasingly speak about a lack of belief in the Real Presence of Our Lord in the Holy Eucharist.  Statistics alarmingly show  this happening.  One has to ask honestly if the overuse (misuse?) of EMOHC’s—as well as factors such as Communion in the hand, quicker lines without kneeling, etc.—somehow contributed to this?
Then there are the problems created when people begin to think that becoming an EMOHC is more of a “right” than a unique, extraordinary privilege.  I know of cases where people came forward to serve as “ministers” when they had irregular marriages (divorced and remarried outside the Church) or were living in the state of sin.  They, in fact, should not be receiving Holy Communion, let alone distributing Our Lord.

There are also the situations where people are not properly dressed to attend Mass, let alone distribute the Precious Body and Blood of Our Lord Jesus Christ.  I may hear the excuse:  “At least, Father, they’re coming to Church.”  Yes, but think about how our dress should reflect what we believe is happening at Mass.  God Himself is present on our altar and in our tabernacle.  A priest or deacon wears special vestments to accompany the sacred actions taking place.  And then we dress like we are going to the beach or to the gym to distribute Holy Communion?

What I have said is meant to make us all think and to reflect on some factors that may have contributed to possible abuses in today’s Mass and that may have slowly crept in over the years.  We become accustomed to them, may readily accept them now and never question what has occurred over time.

And when no one is left in the pews, we will undoubtedly wonder why? 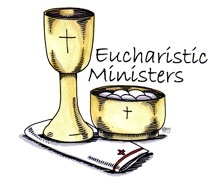 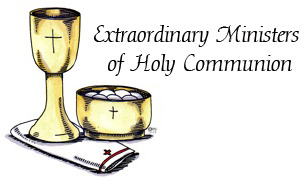