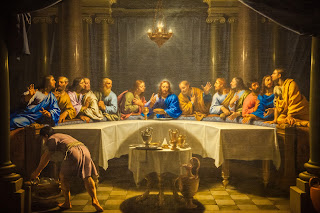 As I continue my reflections on the Holy Sacrifice of the Mass, I bring to your attention the meaning of the word Eucharist (eukharistia) from the Greek meaning thanksgiving.

In the Novus Ordo Mass, the second major part (after the Liturgy of the Word) is referred to as the Liturgy of the Eucharist. It includes the Eucharistic Prayer when the unleavened wheat bread and grape wine are consecrated and truly become the Body and Blood of Our Lord Jesus Christ. This mystery has been explained using the term transubstantiation, meaning the substance of bread and wine is changed into the Body and Blood of Jesus while the accidents (the appearance of bread and wine) remain the same. The Catholic Church teaches that this change is not merely symbolic but actual or real.  Hence, we speak of the Real Presence of Jesus in the Blessed Sacrament or Holy Eucharist.

We hear words beginning the preface of the Eucharistic prayer urging us: “Let us give thanks to the Lord, our God.” We also hear about Jesus taking bread, saying the blessing / giving thanks, breaking the bread and giving it to His disciples. We believe what Jesus declares (“This is My Body / My Blood”) literally happens. It is what occurs at every Mass when the priest stands in for Christ (in persona Christi) so that it is actually Christ who performs the action through the instrument of the priest. That is why the constant teaching of the Catholic Church has been that the priest must be male because the priest stands in place of Christ who was male. We believe this Ministerial Priesthood is Divinely established and is therefore not open to change.  Pope St. John Paul II made this clear in his Apostolic Letter ORDINATIO SACERDOTALIS:


“Although the teaching that priestly ordination is to be reserved to men alone has been preserved by the constant and universal Tradition of the Church and firmly taught by the Magisterium in its more recent documents, at the present time in some places it is nonetheless considered still open to debate, or the Church's judgment that women are not to be admitted to ordination is considered to have a merely disciplinary force.

Wherefore, in order that all doubt may be removed regarding a matter of great importance, a matter which pertains to the Church's divine constitution itself, in virtue of my ministry of confirming the brethren (cf. Lk 22:32) I declare that the Church has no authority whatsoever to confer priestly ordination on women and that this judgment is to be definitively held by all the Church's faithful.”


Making a proper thanksgiving after receiving Holy Communion is something that also needs continual emphasis and reinforcement. We see people leaving Mass early (sometimes directly after receiving Holy Communion) and it is natural to wonder if there was adequate time given to praise / adore, to thank, to petition, and to ask for forgiveness from (reparation) Our Lord.   After all, we have just received God Himself (Jesus, the Second Person of the Blessed Trinity) and we have been united with Him in Holy Communion. Doesn’t this deserve a few moments of quiet, intimate reflection and prayer? Sometimes bad habits—like leaving Mass early—are hard to break! I do realize that not everyone is able to receive Holy Communion. Those in this situation should make a Spiritual Communion instead.

Give thanks to the Lord, especially at this time when our nation celebrates Thanksgiving, and attend Mass with your family!  Have a Blessed Thanksgiving!