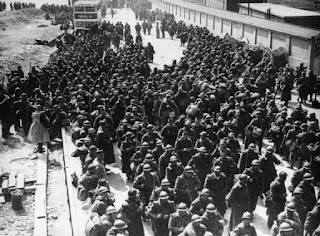 This past summer I saw the movie Dunkirk at the theater.  It was a moving story about Allied troops being rescued as both the military and civilians cooperated in a remarkable rescue attempt.  Here’s a synopsis of the movie:
In May 1940, Germany advanced into France, trapping Allied troops on the beaches of Dunkirk. Under air and ground cover from British and French forces, troops were slowly and methodically evacuated from the beach using every serviceable naval and civilian vessel that could be found. At the end of this heroic mission, 330,000 French, British, Belgian and Dutch soldiers were safely evacuated. (IMDb)
It struck me how the teamwork of civilians and the military led to an otherwise improbable great rescue.

Recently, we watched as Hurricane Harvey drenched areas of Texas and the Gulf coast reminding me of the account of Noah and the great flood.  Again, the cooperation of neighbor helping neighbor and civilians working with federal and state government agencies and the military, helped to save so many people who were caught off guard.  People came from different parts of the country.  There were police, fire-fighters, EMT’s, swift water rescue teams, the American Red Cross, Animal Rescue Corps, the Cajun Navy, FEMA, the US Coast Guard, and many, many volunteers and organizations working hand in hand.  Rescuers employed jet skis, monster trucks, helicopters, military vehicles and boats of every size.  People responded with donations of food, water, clothing, blankets, pillows and money.  Strangers came together and cooperated.  They helped one another.

At various times of tragedy, the best in human nature often becomes more apparent.  Despite the disaster, people seem to rise to the occasion.  I saw this after 9-11, Katrina and Sandy, and now Harvey.  People came together to help one another, to sustain one another.  Good surfaced despite the evil or tragic cause.

We all need to take a lesson from the selfless behavior of so many of the rescuers.  Their sacrifices and willingness to serve others—knowingly or unknowingly—follows the example of Christ (and his sacrificial death on the cross).  No one has greater love than this, to lay down one’s life for one’s friends. (John 15:13) Rescuers were willing to give of themselves, even risking death, for the benefit of others.  Their valiant efforts saved many, many lives.
For Jesus’ disciples, His death on the cross seemed a tragedy and disaster.  It was not fair.  How could this happen?  However, what took place on the cross, what seems to be death, defeat and loss, was transformed into something life-giving and salvific.  Jesus rose from the dead.  Goodness ultimately triumphed through and despite apparent tragedy.

I am sure there will be many other tragedies and disasters—natural and man-made—we will have to face in our lifetime.  Yet, I am confident that when people come together and cooperate, when we are willing to give of ourselves for the sake of others, when we are more Christ-like, no catastrophe will have the final word.

Pray for the victims of Harvey and other natural disasters in our country and throughout the world.  Pray that the best of human nature will always rise to the occasion.  Our future civilization truly depends on it. 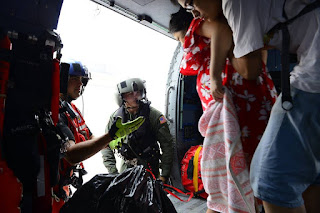 A rescue from Hurricane Harvey
Posted by Fr. Edward Namiotka at 5:10 PM