When the Entire World is Upside Down 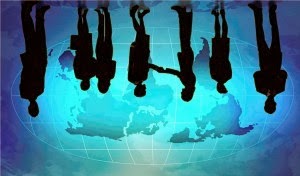 I know that Jesus would use a type of hyperbole—an intentional exaggeration for effect—at various times in the Gospels.  Did he really want us literally to tear our eyes out and throw them away (see Mt. 5:29) or to cut our hands off and throw them away (see Mt. 5:30) as stated in the Sacred Scriptures?  I don’t think so.  He most likely said things in this manner to wake people up and have them pay attention to what he had to say.  He needed people to recognize his legitimate authority.

Much was the same with Jesus’ miracles.  His miracles were often meant to attract people to His message and to show His true authority:  “’But that you may know that the Son of Man has authority to forgive sins on earth’–he said to the paralytic, ‘I say to you, rise, pick up your mat, and go home.’” (Mk. 2:10-11)  I suppose in Jesus’ time, just as in ours, people wondered who to listen to, who is telling the truth and what authority is legitimate.  Many people, then and now, have various things to say, but they certainly don’t all carry the same weight.  My utmost attention goes to the Son of God—hands down!

In today’s conversations we too may say some things emphatically to get a point across:  “That weighs a ton!” “I’m so hungry that I could eat a horse!” and “I’ve told you a million times already!”

I guess that there are times when our current culture has become so de-sensitized or may even have become so calloused to current societal issues that we may need to say something in an unusual or extreme manner to get people’s attention once again.  Society nowadays is also so careful to be PC (i.e., politically correct) on almost every matter for fear of offending someone.

So how do we make people realize that the breakup of the traditional family is tragic for society, how abortion has killed more than 55 million people (in the USA alone) since Rove v. Wade legalized abortion in 1973, how co-habitation outside of marriage can have detrimental effects on relationships, how homosexual sexual acts are always sterile and empty acts, and how our addiction-prone society (alcohol, drugs, sex, pornography, gambling, shopping, etc.) can destroy moral character and ultimately lead to self-destruction, just to name a few contemporary societal concerns?

What do I say or do to make people pay attention?

Therefore, stay awake! For you do not know on which day your Lord will come. Be sure of this: if the master of the house had known the hour of night when the thief was coming, he would have stayed awake and not let his house be broken into. So too, you also must be prepared, for at an hour you do not expect, the Son of Man will come. (Mt. 24: 42-44)

I often wonder just who is listening to Him?

I express my frustration like this:  The entire world is upside down!

And, in my humble opinion, it seems to be no exaggeration!