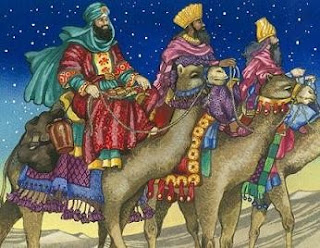 To me they always seemed like strange gifts to bring a newborn baby: gold, frankincense and myrrh.  Today we would think of things like diapers, toys, blankets, formula, socks, pajamas, etc. to bring to an infant.  Obviously, there is more to the gifts of the magi than meets the eye.

Gold is meant as a tribute to a king.  Gold as a precious, valuable metal was prized by many cultures and worn by kings, present in the worship of gods, and used as currency.  Jesus is indeed a king—the King of the Universe.

Frankincense is offered to a deity.  When we occasionally burn incense in church (and the parishioners begin to cough automatically) it is meant to be a symbol of our prayers rising up to God.  Psalm 141: 2 states:  Let my prayer be incense before you . . . and the Book of Revelation (5:8) speaks of the elders who held a harp and gold bowls filled with incense, which are the prayers of the holy ones.  The Hebrews had an altar of incense where a pleasing fragrance burned before the Holy of Holies.  Some other cultures, like the ancient Romans, burned incense before their various statues as a sign of divinity.  Jesus is divine—the Son of God.  He is also the Great High Priest who is mediator between God and man.

Myrrh has various uses in perfumes, incense and medicine.  The ancient Egyptians used it for embalming of mummies.  When it is presented to Jesus it can be symbolic of his healing ability or an anticipation of his death and burial.  Jesus was offered myrrh mixed with wine on the wood of the cross.  Nicodemus brought myrrh to the tomb for Jesus’ burial.

Gift-giving has become such a part of the Christmas season, often overshadowing the true spiritual meaning of the Incarnation.  What is so astounding is that God became man!  Our Creator became a creature.  God in all His power became a powerless, vulnerable infant who needed his mother and foster-father to feed, clothe and provide for Him.  Timelessness entered into time, the Immortal, Eternal One became subject to death, and the All-Knowing God had to grow in “wisdom, age and favor.” (Lk. 2:52)

When we celebrate the Epiphany (manifestation or showing) of the Lord to the magi (astrologers representative of non-Jews or gentiles) we realize that salvation is open to all peoples and we are directed to Christ as the one and only Messiah and Savior of the World.

Our fitting gift to Jesus should be a humble and contrite heart, as the psalm relates. (See Ps. 51:19) He does not need material “things” to make Him happy.  Instead He desires us and our willingness to do His will.  He desires obedience to His commands.
The law of the LORD is perfect, refreshing the soul.
The decree of the LORD is trustworthy, giving wisdom to the simple.
The precepts of the LORD are right, rejoicing the heart.
The command of the LORD is clear, enlightening the eye.
The fear of the LORD is pure, enduring forever.
The statutes of the LORD are true, all of them just;
More desirable than gold, than a hoard of purest gold,
Sweeter also than honey or drippings from the comb.
By them your servant is warned; obeying them brings much reward.
(Ps. 19: 8-12) 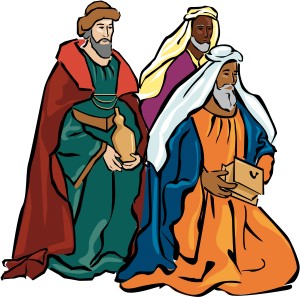