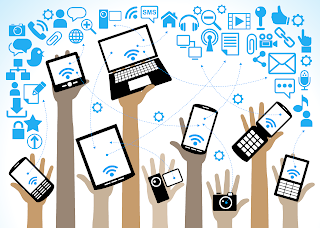 A few weeks ago, I was visiting downtown Philadelphia.  I tried to find some peace and solace, for a couple of moments at least, in one of the Catholic churches open daily for Eucharistic adoration.  As I was sitting in the quiet, a cellular phone began to ring.  It made itself known with one of those old-fashioned telephone bell rings:  brrring! brrring!  .  .  .  brrring! brrring!  Its owner quickly silenced it.

After a few moments, I resumed my prayerful silence.  I was somewhere in the middle of a heartfelt petition to God when another phone went off.  This time a modern ringtone made its owner (and the rest of us) aware of its pending message with a catchy (no, annoying) tune.  A not-too-quiet gentleman-owner proceeded to answer the phone:  “Hello!  Yea!  I’m in church now.  Hold on a sec.”  He continued to talk for another minute or so as he headed for the church door.  Out he went.  Good riddance!

Determined, once again, I resumed my intimate conversation with The Almighty.  I tried to find at least  a moment of much-desired tranquility.  Momentarily, however, the same gentleman was back inside the church walking down the aisle.  That stupid phone started to bellow once again.  It reminded me of an obstinate, spoiled child clamoring  for the attention of its parent.  “Hello!  Yea!  I’m in Church.”  Here we go again!  I was too annoyed (no, angry) to pay attention to the rest of his conversation.

I was resolved at that point, if God would permit it, to become a Tibetan monk.  No cell phones.  No tablets. No electronic devices at all!  Period.

When did a mobile phone become an inseparable appendage to the human body?  A tablet now frequently substitutes as a baby-sitter to keep the children amused or quiet.  People are fixated surfing the internet for hours upon hours each day.  Cellular phone zombies walk into traffic and various inanimate objects and innocent bystanders while texting regularly.  We are sternly warned not to text and drive, yet it unfortunately still goes on.  Vitamins are now advertised to help protect the eyes from computer vision syndrome (CVS).  Let’s face it.  People are addicted to their electronic devices.

I have a unique suggestion for Lent.  Why not try fasting from your electronic devices for a just a day?

I bet you can’t do it!  I dare you!  I have done this occasionally, like on Thanksgiving or Christmas Day, when I am with my family.  I leave the phone in its charger in my room for the day.  I really don’t need to use it and I don’t.  Those who are important to me are currently with me.  People mean so much more than some stupid device.

I double dare you!  Try putting your phone or other device away for the day—the entire day.  No Facebook, Twitter, or Instagram.  No text messages.  No annoying calls.  No internet or computer either.  Resurrect the art of conversation!  Play a classic board game or card game with the family.  Go outside and catch a baseball or football.  Kick a soccer ball.  Get off the couch and get dirty in the yard.  Put down and put away the device.

It wasn’t until the end of the last century that human beings became addicted to electronics.  For most of human history people did not own any of the devices that so many of us can’t seem to do without.

Maybe it can become a national (no, worldwide) trend.

I double dog dare you!