Parables and the Kingdom of Heaven 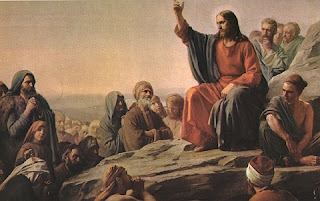 Jesus often uses parables to get his message across.  Most times I prefer someone to be clear and direct. Tell me exactly what you mean! Don't give me a song and a dance!  Give it to me straight!  However, Jesus frequently does not do this.  He may answer a question with another question. He may remain silent. He may tell a parable.

A parable is a succinct, didactic story, in prose or verse that illustrates one or more instructive lessons or principles. It differs from a fable in that fables employ animals, plants, inanimate objects, or forces of nature as characters, whereas parables have human characters. A parable is a type of analogy.
One thing that parables should make us do is think.  At times, we may come to different conclusions or even be left confused.  Jesus would explain parables to his disciples privately to help them understand their meaning as he did with the Parable of the Sower last week (Mt. 13: 1-23) or in today's Gospel about the Weeds in the Field (Mt. 13: 24-43).  Just because Jesus may use symbolic, poetic or a type of flowery language--make no mistake--even in the use and explanation of his parables, he could be quite forceful when speaking about certain things (like a fiery furnace and wailing and grinding of teeth!)

Next, there is this concept of the Kingdom of Heaven.  Living in a nation that does not have a king and even established its unique identity by declaring independence from a king, the idea of kingship may be foreign to many and perhaps, repugnant.  I vote! I pay taxes! No one is going to tell me what to do!

Be careful, however, when we refer to God.  We are creatures; God is Creator.  God is absolutely sovereign.  We were brought into being by God's great love and given intelligence and free-will, noting how we were created in His image and likeness.  Respect for God (fear of the Lord) and all that God is (omnipotent, omniscient, omnipresent, all-holy, all-merciful, all-loving, transcendent, eternal, etc., etc.) gets lost in a secular society.  We suffer from shortsightedness, a desire for pleasure and immediate gratification and an ever-increasing absence and possible disdain for any matters considered religious, sacred or holy.  Even the absolute sacredness of human life itself has dramatically and horrendously diminished.

When Pope St. John Paul II gave to us the Luminous Mysteries of the Holy Rosary for meditation and reflection, I initially thought that the third mystery was somewhat ambiguous.  Why was the Proclamation of the Kingdom (and the Call to Conversion) so important?  With time, I have personally realized a deeper appreciation of this mystery.  Allow me to share this descriptive synopsis of the mystery:

The preaching by which Jesus proclaims the coming of the Kingdom of God, calls to conversion (cf. Mk. 1:15) and forgives the sins of all who draw near to him in humble trust (cf. Mk 2:3-13; Lk. 7:47- 48): the inauguration of that ministry of mercy which he continues to exercise until the end of the world, particularly through the Sacrament of Reconciliation which he has entrusted to his Church (cf. Jn. 20:22-23).

Jesus ushered in the Kingdom of God and through His Incarnation Heaven and Earth were united.

May we do our part to build up His Kingdom here on Earth!