Finding God on the Cruise Ship 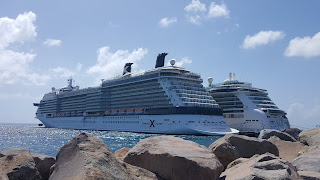 Each year around this cold, wintery time I try to take my mom on a brief vacation.  As she gets older (82), I realize that it is a gift to me to be able to spend some extended time with her.  Dad has been gone over two decades now.  Since I am the only “unmarried” child in the family, I usually arrange for mom to go with me somewhere manageable.  I worry about her health and mobility issues, as she does.  A cruise to the Caribbean usually seems to fit our current situation as these ships generally accommodate seniors very well.

I served as the chaplain for the trip.  My responsibility was daily Mass for the passengers with an additional Mass on Sunday for the crew.  I was also personally requested to hear the confessions of both passengers and crew members alike.  What made the trip somewhat awkward initially, however, was the fact that we were going away at the beginning of Lent—not really a time for feasting and festivities.  Lent came very quickly after the Christmas season this year.  To top it off was the Gospel for the 1st Sunday of Lent (which I had to preach on) concerning Jesus going into the desert to fast for 40 days and 40 nights.  Fasting is not something that you usually attempt with endless buffets, flowing alcohol and elaborate dinners each day.

I recalled a story that a Trappist monk had told me on retreat some years ago about his being assigned to be in charge of the bakery after he had entered the monastery.  He protested to the abbot that this was not what he expected when he became a monk.  The abbot’s response to him was simply:  Find God in the bakery!  Taking this approach with my current situation, I reminded the passengers (as well as myself) that it was important for us all to find God here on the cruise ship.  This would be our Lenten challenge.

At each port I made it a task to seek out the local Catholic Church.  I found the Cathedral of Sts. Peter and Paul and St. Ann Chapel both in Charlotte Amalie, St. Thomas, U.S. Virgin Islands.  Unfortunately, they were both locked shut on this particular day (U.S. Presidents Day).  In Basseterre, St. Kitts, I located the Co-Cathedral of the Immaculate Conception.  I was able to spend some time there in prayer while I observed one of the religious sisters from the Catholic school explain the Stations of the Cross to her class.  I could not easily find a Catholic Church in Bridgetown, Barbados but did come across St. Mary’s Anglican/Episcopalian Church which I briefly visited.  Somehow I missed St. Patrick’s Roman Catholic Cathedral and the other Catholic churches there.  Finally, I already knew from previous visits the location of St. Martin of Tours Church in Phillipsburg, St. Maarten.  As I entered there at approximately 3 PM on that Friday, there were about a half-dozen people singing the Chaplet of Divine Mercy.  I stayed there to pray with them for a while.

I found many blessings on my brief 10-day vacation, including the opportunity to hear the confessions of passengers and crew alike.  I also met a number of faithful Catholic people, some of whom were willing to read at Mass each day and helped with the distribution of Holy Communion at the Sunday Masses.  We had approximately 40-50 people at daily Mass and 250-275 for each of the two Sundays I was there.

God was indeed present in our midst. 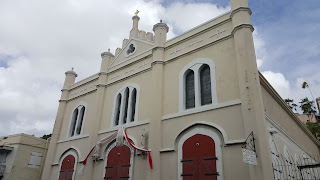 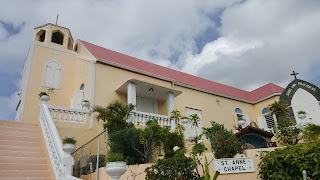 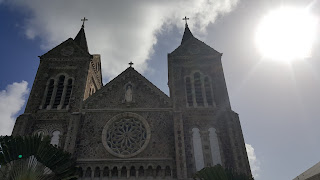 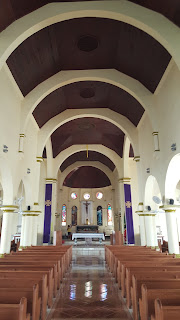 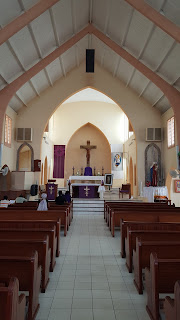