The Submarine Catholic and the "New Evangelization" 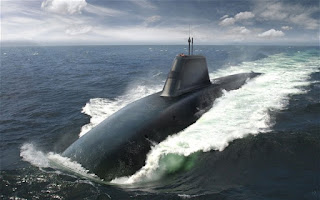 Last month I was at a wedding and someone described herself to me as a submarine Catholic.  Not quite sure of what she meant—probably because of the perplexed look on my face—she continued to explain:  “Yeh, I surface at Christmas and Easter.”

While I had to chuckle at the remark, I later thought to myself:  Is this what our Catholic faith has come down to?

Pope Saint John Paul II called for a type of new evangelization in his encyclical Redemptoris Missio.  He spoke of those situations in the Church “where entire groups of the baptized have lost a living sense of the faith, or even no longer consider themselves members of the Church, and live a life far removed from Christ and his Gospel.  In this case what is needed is a ‘new evangelization’ or a ‘re-evangelization.’" (#33)

How common it is for baptized Catholic people today to be only loosely connected to their Church or to be alienated from it entirely.   Mass attendance here on any given Saturday/Sunday is less than 25% of the registered Catholics of the parish.  During weddings and funerals, when we often see Catholics re-surface for the particular occasion, I can usually sense when people haven’t been to Mass in a while.  For example, I frequently hear the former response “And also with you” when I greet the people “The Lord be with you.”  The response changed a number of years ago when the new translation of the liturgy was implemented (Advent, 2011).

We continually see Catholic couples cohabitating before marriage, Catholics not properly married in the Church (usually without any required dispensation), pro-choice Catholics, Catholics supportive of gay marriage, Catholics who practice artificial birth control, sparse confessional lines, and the vast majority of Catholics either unknowingly or shamelessly coming up to receive Holy Communion—especially at Christmas and Easter.  Do we need a "new evangelization?"

In addition, according to the Pew Research Center, the number of those “unaffiliated” with a church or religion in the U.S. is up to about 23 percent.  Catholicism is still the largest denomination in America, but the second largest group of people, above and beyond any other Christian or Protestant denomination, is former or ex-Catholics.

Whenever I offer Mass and I repeat the words of consecration—the words that Jesus spoke when He gave us His Body and Blood in the Eucharist—I am reminded of THE BLOOD OF THE NEW AND ETERNAL COVENANT.  Jesus sealed this covenant in His own blood.  The sacrifice was a total self-giving.  Jesus gave everything for us and took our sins upon Himself.  He unquestionably did His part.

I think He deserves more of a commitment from us than perhaps surfacing once or twice a year.