Vocations and the Holy Eucharist 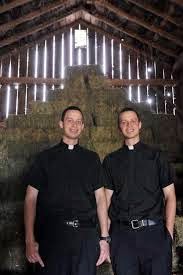 A few years ago, I read a story from the New York Times regarding priestly vocations flourishing in a particular area of Michigan.  It caught my attention because this is usually not the type of story reported in a secular, national newspaper.  More than likely, the focus in such a newspaper is on some church scandal and/or how the Catholic Church is incorrect in some teaching or another.

At the time of the article (June 2014), Fowler, Michigan had twenty-two priests to its credit as did its neighboring town of Westphalia.  Forty-four priests from two small towns with a combined population of about two thousand people.

What was their secret?

Reading information from a secular newspaper source is not always the best way of reporting something theological, religious or spiritual.  I did notice that the Times article mentioned “a weekly prayer hour dedicated to religious vocations.”  I went to the web site for the parish of the Most Holy Trinity in Fowler to get more details.  More precisely, I discovered the parish there holds a weekly Eucharistic Adoration for Vocations—a Eucharistic Holy Hour—followed by Mass.

Since my seminary days, I have believed in the importance of Eucharistic adoration and its intimate connection to the Catholic priesthood.  I can remember the great reverence for the Holy Eucharist that the pastor from my childhood parish (St. Ann’s, Wildwood) had.  It was so mystical the way that Msgr. Joseph Conlon gazed at the Eucharist.  As I knelt next to him as an altar boy, it seemed to me that he was somehow other worldly.  I can’t necessarily put it into words but I somehow knew that he and I were kneeling before Jesus, the Son of God.  No doubt about it!

Then I read something printed in the Most Holy Trinity church bulletin:

This is how St. John Vianney taught his faithful to pray: "You do not need many words when you pray. We believe on faith that the good and gracious God is there in the tabernacle; we open our souls to Him; and feel happy that He allows us to come before Him; this is the best way to pray."  He did everything that there was to be done to stir up the reverence and love of the faithful for Christ hidden in the Sacrament of the Eucharist and to bring them to share in the riches of the divine Synaxis; the example of his devotion was ever before them.  "To be convinced of this, witnesses tell us, all that was necessary was to see him carrying out the sacred ceremonies or simply to see him genuflect when he passed the tabernacle."
--Pope Saint John XXIII


Unfortunately, this year (2019) the Diocese of Camden did not ordain a single priest.  Years ago, this same diocese ordained large classes of twenty, thirty or more.  Maybe it’s time that we once again get down on our knees and pray to (rather, beg) Jesus in the Holy Eucharist to send us priestly and religious vocations.  Spending time before the Blessed Sacrament, while fostering and encouraging priestly and religious vocations, seems to work in Fowler and its surroundings.  (Remember we have a Eucharistic Holy Hour every Monday at 7 PM in St. Patrick Church.)

In the end, what do we have to lose?  (Maybe our faith.  The stakes are really that great.)