A Journey of Faith . . . beginning a Year of Faith 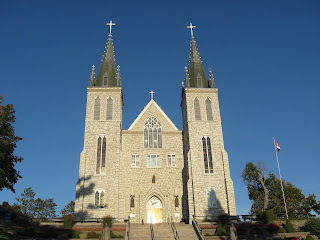 Last week I made my annual retreat. As in many years past, I went to the Abbey of the Genesee (Piffard, NY--in the northwest part of the state) with the Trappist Monks for a week of prayer and solitude. I am truly grateful for this time to be spiritually renewed. It helps to put so many things into proper perspective. Be assured that I prayed for you during this sacred time!

I also began to prepare spiritually during the retreat for the upcoming Year of Faith (October 11, 2012 to November 24, 2013) declared by Pope Benedict XVI.

After the retreat, my two priest-friends and I decided to take a few days travelling together somewhere mutually agreeable. This year we continued our spiritual journey by visiting some of the holy shrines located in New York state and Canada since we were already up in the area.

Our first stop was the Martyrs’ Shrine in Midland, Ontario. The Shrine honors the eight Jesuit saints who lived, worked and (some of whom) died there almost 400 years ago. Jesuit missionaries, Jean de Brébeuf, Gabriel Lalemant, and their companions were responsible for bringing Christianity to Canada over 380 years ago! A magnificent twin-spired church sits on 75 acres of hallowed ground.

Nearby was a reconstructed village—Sainte-Marie among the Hurons—which claims to be Ontario’s first European Community. This village was the headquarters for the French Jesuit Mission to the Huron (Wendat) people. In 1639, the Jesuits, with French lay workers, began construction of a fenced community that included barracks, a church, workshops, residences, and a sheltered area for native visitors.

Also in this area were monuments commemorating St. Louis and St. Ignace, two settlements where the French Jesuit missionaries Jean de Brébeuf and Gabriel Lalemant were captured and subsequently martyred in 1649.

It was a considerable drive through the night to Montreal, Quebec to visit the Oratory of St. Joseph. This oratory, standing atop Mount Royal, was completed in 1967 and is the largest (basilica) shrine in the world dedicated to St. Joseph. It is here that the remains of Saint (Brother) André Bessette are entombed and reverenced.

Brother André (known as the Miracle Man of Montreal) was a humble, illiterate lay brother of the Congregation of the Holy Cross. Among other tasks, he served as porter (doorkeeper) for Notre-Dame College in Montreal for approximately 40 years during which time construction of this magnificent shrine began. He was known for his hospitality and compassion for the sick and thousands of miracles and healings are attributed to his intercession. On October 17, 2010 he was canonized a saint by Pope Benedict XVI.  His feast day is January 6. 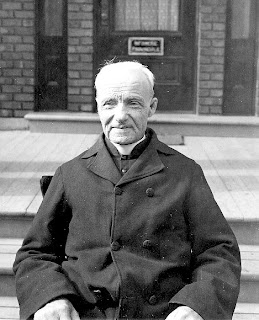 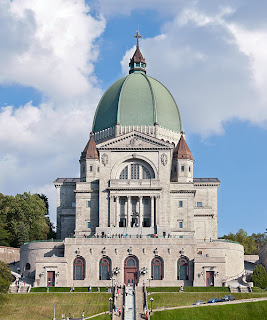 (To be continued)
Posted by Fr. Edward Namiotka at 9:30 AM