But It’s Just So Ordinary! 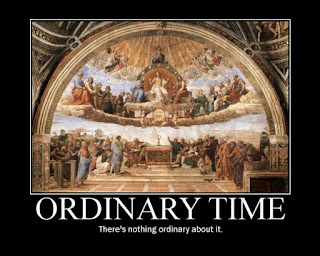 
We are back to the time of the Church year that is known as Ordinary Time.  Sounds so boring to our fast-paced society, doesn’t it?  Many people seek the spectacular (entertainment), the exciting (vacations, travel), that which stands out and draws attention to ourselves (hair styles, fashion, tattoos, piercings), anything not quite so mundane.


But when we get right down to it, much of our day and our lives involves a basic routine:  get up, brush the teeth, shower, have a cup of coffee, go to work, eat three (or more) meals during the day, sleep, etc., etc.  Repeat daily.  Repeat weekly.  Repeat monthly.  Repeat annually.


In the course of this routine, is there time set aside for God?  Where in the daily or weekly schedule is there time for prayer, spiritual growth and the other-worldly—time for God?  Ordinary time in the Church is a good reminder for us that not every time or season is special (like Advent/Christmas or Lent/Easter) but can be simply ordinary.  And it is often in the ordinary things of life that we can find God.


Recall the passage from the Scriptures:


God was not in the heavy wind, the earthquake or the fire—the spectacular, the exciting or the extraordinary.  He was, however, found in the ordinary—the tiny whispering sound.


God’s presence may be discovered regularly in a child’s smile, in the beauty of nature, in a simple act of kindness or in the depths of our hearts.  He is found in a married couple’s love, in those who care for the sick or suffering, or in those willing to forgive after being wronged.


For believers, we find Jesus, the Son of God in an ordinary piece of bread and some wine consecrated into His Body and Blood.  He is found where two or three ordinary people gather in His Name in prayer.  He is present in the Sacraments, in the Sacred Scriptures, in His Mystical Body—the Church, and in the Ordained Priest acting in His Person.


Even though things in this world may be ordinary, it doesn’t mean that God can’t use them or reveal his presence through them.  Nothing ordinary about that! 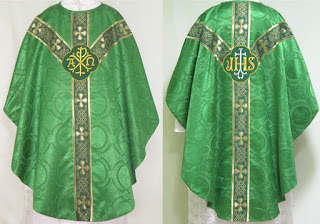