Facing Death (with the Help of My Guardian Angel?) 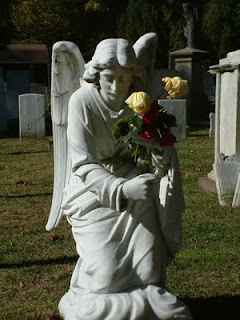 Dear Parishioners,
(Summertime and swimming in the Atlantic Ocean once again bring to mind this life-changing event.)

I was going to die.
I seriously thought that the end had come.  Recalling the situation still produces a cold sweat.
It was September, 1989--sometime around Labor Day weekend.  The storm that was to become known as hurricane Hugo was picking up strength as it approached the Caribbean many miles away.
I was vacationing with a priest-classmate and his family in Sandbridge Beach, VA (just south of Virginia Beach).  He had invited me down to join him for some R & R.
Sandbridge Beach was private and isolated.  No lifeguards.  A few surfers were in sight as the waves were kicking up significantly.  And there was lurking along the coastline a soon-to-be opponent waiting for someone to combat—a very strong, deceptive riptide.
My classmate, Fr. Bob, decided that he was going to go into the ocean.  Not too bright of an idea, looking back.  As I was walking along the beach I saw him swimming and realized that he was having some real problems.  No, he was in trouble, for sure.
Without much thought I jumped in and began to swim toward him.  (Even though I grew up in Wildwood, NJ—a beach resort—I was not a great swimmer.)  I was fortunate enough to reach him, and to give him just enough assistance to allow him to catch a wave and head into shore.
In the meantime, the riptide got me!  It wrestled me down. It pulled me under.  When I surfaced it seemed like I was more than a football field’s length from the shore.  And I began to panic! Seriously panic!
“Help! Help!” I screamed as I waved my hands hoping that someone in the distance would see me.  I was treading water but then I was pulled under once again!  I never was more afraid in all my life.  I am going to die.  Nobody’s here to help me out in the Atlantic Ocean.
When I surfaced, I remembered that I looked down at my Miraculous Medal (an image of the Blessed Virgin Mary) hanging around my neck and resting on my chest.
Soon after I heard a voice coming from my left side.  “Everything will be alright! Stay Calm! Stay Calm!”  Someone was swimming toward me.  A young fellow in his teen age years.
Although he reached out his hand toward me once he was next to me, I didn’t want to take it.  For some reason I recall thinking that if I was going to die I didn’t want to take him down under with me.  I was significantly larger than he was—probably at least 100 pounds.  And I was panicking.  (Funny the things that you remember.)  He kept swimming around me trying to keep me calm and assuring me that everything would be alright.
Meanwhile, Fr. Bob had reached shore and pointed out to some surfers that I was in trouble.  They came after me with a surfboard.  Good thing they did because I felt my body going into shock.  It was as if there were lead weights on my arms and legs making it difficult (nearly impossible) to move them.
Thankfully I was rolled onto a surfboard and pushed to shore.  Fr. Bob, looking exhausted and beat up, was there waiting for me.  I could hardly walk.  I sat down on the beach with my body so tense that every little movement was a major project.


The fellow who first reached me in the water and swam around me keeping me calm was now standing at my left side.  He asked me if I was okay.  I remember saying, “Yes. Thank you so much.”  Then I turned to talk to Fr. Bob for just a moment.  He was sitting on my right side.  When I looked back to the left, my rescuer was no longer there.  Where did he disappear to so quickly?  There were only a few people on the entire beach.  And he was nowhere to be seen.
That evening Fr. Bob and I celebrated a Mass of Thanksgiving for having averted a possible tragedy:  the drowning/potential death of two priests.
We asked ourselves a number of questions:  Who was that teenager who swam out to meet me?  Where did he come from?  Why did he not seem to have trouble swimming in those rough waters like we did?  Where did he disappear to all of a sudden, as if into thin air?
I continue to wear my Miraculous Medal every day, faithfully.
I also believe in guardian angels.  Do you?
Fr. Ed Namiotka,
Pastor 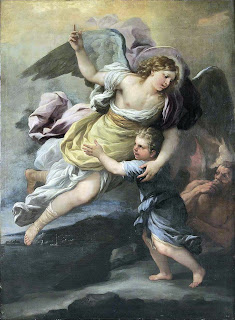