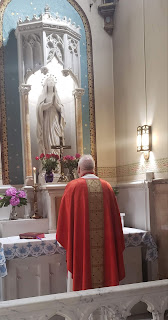 I have been sensing a certain restlessness in the people whom I had the opportunity to speak with during the past couple weeks.  After about two months of quarantine, most people seem ready to get back to a normal routine and not be continually confined to home.  With the warm weather upon us, it's time to get out into some fresh air and sunshine.  We need some vitamin D.  We are used to taking walks, riding bikes, playing and watching outdoor sports, enjoying barbecues and cookouts, going to the beach, etc. and not staring at the four walls of some room.  We are not meant to be continually locked up.

I hope that you feel the same way—restless—about not being able to get to Mass.  The words of St. Augustine seem appropriate at this time:  . . . our hearts are restless until they rest in Thee.  Sadly, a significant number of Catholics were not regular in their Mass attendance prior to the coronavirus pandemic.  Now that the situation has proven not as bad as it could have been, I wonder what Mass attendance will look like in the weeks and months ahead?  Will we have a greater hunger for the Bread of Life?

I have been offering a "private" daily Mass, usually at one of the side altars in St. Patrick Church or in our rectory chapel.  All of the announced (and some unannounced) Mass intentions are being fulfilled by our priests.  Mostly, Mass is being offered ad Deum (towards God) or ad orientem (facing liturgical east) and not versus populum (facing the people).  The side altars and the original high altar of St. Patrick Church had been constructed for Mass to be offered facing God.  With people technically absent, it makes no sense to face the people during the Mass.  (We do not live-stream the daily Mass, only on Sunday.)

Truth be told, I have gained a greater appreciation for Mass celebrated with the ancient ad orientem orientation.  Follow my thought process for a moment.  The priest is offering a sacrifice to God (not to the people) so shouldn't the priest be facing in His direction (ad orientem)?  The ancient tradition was to face east towards the rising sun which would bring to mind the rising (Resurrection) of the Son of God and await His Second Coming.  While many churches are not necessarily built facing east, the priest can still face liturgical east when offering Mass.  While some have referenced this orientation as the priest having his back to the people, actually the priest and people are facing a common direction towards God.  It was only about a half-century ago that the priest began facing the people during Mass.  For centuries, this was not the case.

During the past 50 years, so many beautiful high altars in churches were dismantled or destroyed.  They were replaced by less attractive table-like altars, mostly in the name of liturgical reform.  Thankfully, our high altar and our side altars at St. Patrick remain essentially the same as they were when the church was constructed (1909).  Despite my sadness of not having the regular congregation present at Mass, a small blessing was being able to offer Mass at the beautiful high altar during Holy Week and at the similarly beautiful side altars—especially the Blessed Virgin Mary side—during the month of May.

I await the day when you will once again join me at Mass!