A Difference in Approach 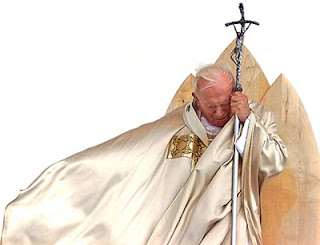 When giving various homilies or talks over the years, I presented a number of examples of how Pope Saint John Paul II fearlessly preached the gospel “in season and out of season,” (2 Tim. 4:2) to quote St. Paul.  The Pope was the most travelled Pope ever, undertaking more pastoral trips than all of his predecessors combined.

His often bold and direct approach to various situations is a matter of record.  Let me give a few specifics.  In Africa, he preached the value of monogamy to a continent that has various areas and cultures that practiced polygamy. Noteworthy is his homily in Swaziland where he preached about monogamy in the presence of King Mswati III and his four wives.  I am sure that all advisors would have cautioned him about such an approach, but this is what the Pope said:  “Christians find that a monogamous marital union provides the foundation upon which to build a stable family, in accordance with the original plan of God for marriage.”


Then there was the Pope’s 4th trip to Sicily where he condemned the mafia publicly.  He urged the people of Catania to “rise up and cloak yourself in light and justice” against the abuses of the mafia.  To the youth in a soccer stadium, after he referenced the fruits of the Holy Spirit, (see Gal. 5:22) he said “When the new generations bring these fruits, corruption is defeated, violence is defeated, the Mafia is defeated.”  (At that time the mafia dumped a lamb with its throat slit on the doorstep of a Catholic prison chaplain as a warning to the priest.)

We also saw how Pope Saint John Paul II stood up against communism by inspiring and encouraging the Solidarity movement in his native Poland, was an outspoken opponent of apartheid in South Africa, and when in America exhorted us all to “defend life.” I quote him regarding our responsibility toward the sanctity of human life:

Respect for life requires that science and technology should always be at the service of man and his integral development.  Society as a whole must respect, defend and promote the dignity of every human person, at every moment and in every condition of that person's life.

For this reason, America, your deepest identity and truest character as a nation is revealed in the position you take towards the human person.  The ultimate test of your greatness in the way you treat every human being, but especially the weakest and most defenseless ones.

The best traditions of your land presume respect for those who cannot defend themselves.  If you want equal justice for all, and true freedom and lasting peace, then, America, defend life!  All the great causes that are yours today will have meaning only to the extent that you guarantee the right to life and protect the human person:
- feeding the poor and welcoming refugees;
- reinforcing the social fabric of this nation;
- promoting the true advancement of women;
- securing the rights of minorities;
- pursuing disarmament, while guaranteeing legitimate defense;
all this will succeed only if respect for life and its protection by the law is granted to every human being from conception until natural death.

Every human person--no matter how vulnerable or helpless, no matter how young or how old, no matter how healthy, handicapped or sick, no matter how useful or productive for society--is a being of inestimable worth created in the image and likeness of God.  This is the dignity of America, the reason she exists, the condition for her survival-yes, the ultimate test of her greatness: to respect every human person, especially the weakest and most defenseless ones, those as yet unborn.
(Detroit Airport, 19 Sept. 1987)

When Pope Francis visited the USA recently, his approach seemed non-confrontational with his emphasis and priorities differing at times from his Polish predecessor.  Still, the message of the Gospel continues to be preached and taught, perhaps in a different manner, with a different approach.  I can sense the love and compassion both men have for the Church and for all humanity.  They show us, as the Vicar of Christ, in their own unique ways, an expression of the human face of Jesus still present in this world. 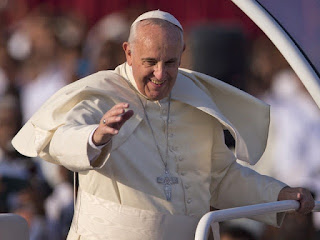