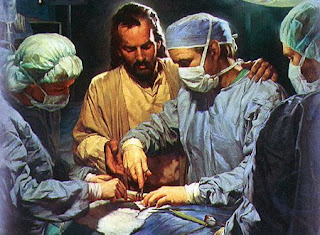 Next week our Parish Nursing Ministry, assisted by the Knights of Columbus Council 10220, will be sponsoring a “Healing Mass.”  To be more precise, it will be a Mass with the Sacrament of the Anointing of the Sick incorporated within.

Perhaps some still have recollections of the term Extreme Unction (last anointing) when a priest anointed people prior to their death.  The Catechism of the Catholic Church sheds some light on the matter:

The Anointing of the Sick “is not a sacrament for those only who are at the point of death.  Hence, as soon as anyone of the faithful begins to be in danger of death from sickness or old age, the fitting time for him to receive this sacrament has certainly already arrived.” (#1514)
If a sick person who received this anointing recovers his health, he can in the case of another grave illness receive this sacrament again.  If during the same illness the person's condition becomes more serious, the sacrament may be repeated.  It is fitting to receive the Anointing of the Sick just prior to a serious operation.  The same holds for the elderly whose frailty becomes more pronounced. (#1515)
Many times I have had to convince people in the hospital or the homebound that they should be anointed, while alleviating the fear that they were not they were not actively dying.  I remind people that the sacraments are for the living and not to wait until the moment of death or until after a person has died to call for a priest.  When a priest is called in advance, he is able to give a gravely ill or elderly person the Last Rites which consist of the Anointing of the Sick, the opportunity for the Sacrament of Penance and Reconciliation (confession) and Holy Communion (Viaticum).  Priests cannot hear a person’s confession or give them Holy Communion after they have died.  Additionally, even though someone may conceivably have been anointed after death, this is not the intention of the sacrament.

Also, to prevent an abuse of the sacrament, a person should not be requesting it because he or she has a sore throat or a headache, but there should actually be a “serious illness or the frailty of old age.” (Catechism, #1520)  Moreover, the sacrament should not be confused with those times when some liturgical or paraliturgical ceremony takes place where everyone in church is invited to be anointed with “blessed oil.”  This type of anointing ceremony is not the Sacrament of the Anointing of the Sick and can cause uncertainty and confusion in laity and clergy alike.

Finally, the Catechism (#1532) tells us what the sacrament does for the sick person:

The special grace of the sacrament of the Anointing of the Sick has as its effects:
- the uniting of the sick person to the passion of Christ, for his own good and that of the whole Church;
- the strengthening, peace, and courage to endure in a Christian manner the sufferings of illness or old age;
- the forgiveness of sins, if the sick person was not able to obtain it through the sacrament of Penance;
- the restoration of health, if it is conducive to the salvation of his soul;
- the preparation for passing over to eternal life.
Jesus is the Divine Physician and He can heal in mind, body and soul.  The Sacrament of the Anointing of the Sick is meant to help those seriously ill or elderly who are in need of the strength and healing that Jesus can provide through the instrument of the priest.  Please consider joining us to pray for and to support our sick and elderly. 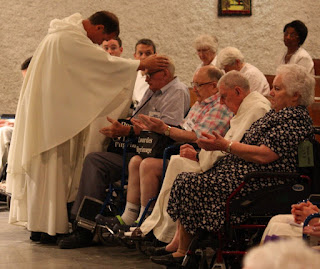 Email ThisBlogThis!Share to TwitterShare to FacebookShare to Pinterest
Labels: Anointing of the Sick, Namiotka, sickness