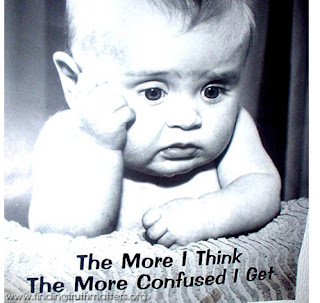 Dear Parishioners,
I have only told this story to a few people over the years.  It concerns my having to make a very important decision that, at the time, could potentially affect my future life as a priest.
Let me take you back to that time.
I was attending Mt. St. Mary’s Seminary in Emmitsburg, MD.  I was more than halfway through my priestly formation, studying to be a priest for the Diocese of Camden, NJ.
An opportunity arose in which I had the possibility to relocate and continue my studies for the Archdiocese of Philadelphia.  This involved a formal transfer from my home diocese of Camden to Philadelphia (where I was born and attended college seminary).  The transfer would require the consent of the bishops of both localities—and it appeared to be a genuine possibility without any apparent obstacles to this transfer.


In brief, the door opened for me to study for the Archdiocese of Philadelphia and I had to make a potentially life-changing decision—should I stay where I was or go there instead?
I took this question to prayer every day.  I wanted to do whatever the Lord wanted me to do.  I prayed for guidance and direction.  I talked it over with some trusted priests.  I prayed from the depths of my being.  I did not want to make a bad decision. I prayed and prayed and prayed.
In prayer, two words kept coming to me over and over again:  “Stay Put.”
How do I know if this was God speaking to me or whether this was just my imagination?  I prayed.  I prayed some more.  I prayed unlike I had ever prayed.  I prayed for some sign, some confirmation.
Stay put.  That’s what I “heard” time and time again.  Stay put.  Nothing more!
In the meantime, I had scheduled an appointment at the diocesan office in Camden potentially to finalize my transfer.  I left the seminary in Maryland to drive to the meeting in somewhat of a daze.  It was more than a three hour drive.
Was I about to do something that I might regret for the rest of my life?  It certainly seems like the Lord wanted me to stay where I was.  Lord, help me to make the right decision.
I had stopped at a red traffic light.  I was staring into space.  Then I looked closely at the tractor trailer (semi) immediately in front of me.  I could not believe what I saw!  On the mud flaps on both sides of the truck were two words:  STA PUT.  (Yeah, maybe the spelling was not exact but the message was nonetheless loud and clear!  Alright already, Lord!  I get it!)
Nearly thirty years later, I am a priest of the Diocese of Camden, NJ.  I realize now how God was teaching me how to discern important matters. Prayer—intense prayer—was the key to finding God’s will.
Prayer and a particular pair of mud flaps, that is!
Fr. Ed Namiotka
Pastor 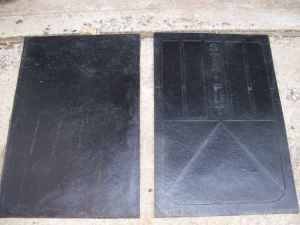 Look closely at the mud flap on the right!
Posted by Fr. Edward Namiotka at 9:03 PM